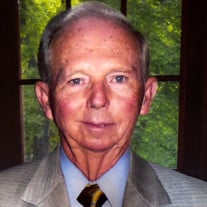 Wilmer Willie Hutchison, age 96, of Greensboro, North Carolina, was received into his heavenly home on March 31, 2022. Bom August 15, 1925, in Traphill, North Carolina, he was the son of the late Hilary York Hutchison and Alice Mae Baugess Hutchison. Wilmer spent his childhood and adolescent years helping his loving mother and father farm their land while remaining active members of Piney Grove Baptist Church. He graduated from Traphill High School in Wilkes County and went on to marry his high school sweetheart, Doris Carter. In 1948, Wilmer and Doris settled in Greensboro, North Carolina, where they raised their children with Christian values and loving hearts. While Wilmer and Doris enjoyed traveling, they also enjoyed life with family and friends. They made many memorable trips which included an Alaskan cruise and a trip to Europe, to name a few. Wilmer modeled after his father in his work ethic and motivation. He always managed to juggle more than one job. Upon moving to Greensboro, he began working as a pressman for Container Corporation of America until his retirement in 1987. While working as a pressman, he and his wife, Doris, owned Hutchison’s Beauty Salon in the Bessemer area of Greensboro. Wilmer’s love for the outdoors led him to open Hutchison’s Landscaping in the early 1970’s. He continued this labor of love until 2019. Wilmer had a kind spirit of servanthood. His Christian faith in Jesus Christ was the foundation of his life. At the age of 12, he surrendered his life to Christ and became a member of Piney Grove Baptist Church. After moving to Greensboro, he became a member of New Bessemer Baptist Church (formerly known as Bessemer Baptist Church) where he was given the trusted duty of opening the church doors each Sunday morning. During the construction of New Bessemer Baptist Church, Wilmer volunteered his service of landscaping the church grounds. Not only was Wilmer ordained as a deacon in 1993, but he also served as secretary of his Sunday school class for many years while preparing and serving personalized cups of coffee to the class members. After the death of Doris in 1996, Wilmer was blessed to find love with his dear friend of many years, Audrey Apple, who he married on July 25, 1998 and with whom he enjoyed his golden years. Together, they joined Friendly Avenue Baptist Church in Greensboro, NC. They shared church friends and activities including travel and volunteer work with Meals on Wheels. Wilmer always had a kind heart to help others who were experiencing a bump in the road. In his waning months, he and Audrey moved to Spring Arbor of Greensboro. His strong work ethic of ambition, patience with persistence, and the desire to please have planted a lasting legacy for his family. Though others might consider it a task of labor, his landscaping work was his playground. While his thumb was green, his creative flair for landscape design was impeccable. A home that Wilmer landscaped in the 1988 Showcase of Homes won the “People’s Choice Award”. He created replicas of award-winning landscape designs and Christmas wreaths using greenery from his yard. As he patiently tackled challenges, he could build anything from a playhouse to a motorized go-cart. Not only did Wilmer enjoy time with family and friends, but he loved watching baseball, ice hockey, and golf. He also loved watching NASCAR, but at the age of 90, he discovered that driving it was better than watching it. His family celebrated his 90th birthday by watching him drive 8 laps around Charlotte Motor Speedway. In addition to his parents, Wilmer was preceded in death by his siblings, Burr York Hutchison and Rosa Adams; his former wife, Doris Carter Hutchison; and a grandson, Michael Devin Hutchison. He leaves behind to cherish his memory, his wife Audrey Hutchison; his children, Terry W. Hutchison (Jan) of Greensboro, and Wilma H. Roark (Jim) of Williamsburg, VA; his sister Leora Sidden of Traphill; his step-children, David Apple (Karen), Greg Apple (Sharen), Andy Apple (Candy), and Jenny Berry (Joel Moody). He is survived by 4 grandchildren, 7 great grandchildren, 1 great-great grandson, 8 step-grandchildren, and 13 step great-grandchildren. There will be a celebration of life service at 2:00 p.m. on Saturday, April 9 at Forbis & Dick Guilford Chapel. The family will receive friends from 1:00 p.m. – 1:45 p.m. prior to the service on Saturday. Interment will follow at Westminster Gardens Cemetery. In lieu of flowers, Wilmer and the family requests donations be made in his honor to New Bessemer Baptist Church, 4115 Hines Chapel Road, McLeansville, NC 27301; Friendly Avenue Baptist Church, 4800 W. Friendly Ave., Greensboro, NC 27410; or Alzheimer’s Association, 4615 Dundas Dr., Greensboro, NC 27407. Online condolences may be offered at www.forbisanddick.com.

The family of Wilmer Willie Hutchison created this Life Tributes page to make it easy to share your memories.

Send flowers to the Hutchison family.