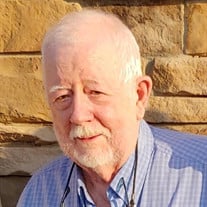 William Alton Ward ended his earthly journey peacefully in the early morning hours of January 21, 2022. Alton was born in Guilford County on March 24, 1938, to William Lesley and Rosa Lee Lewis Ward. He graduated from McLeansville High School in 1956 and served in the National Guard for nine years. On June 29, 1957, he married Shirley McLaurin, who survives him. Also surviving are his son, David Ward and wife Sharon of Tobaccoville; his daughter Shari Hunt and husband Tom Neill of High Point; his granddaughter Bethany Ward; his grandson Andy Hunt and wife Faith; his brother Roy Ward and wife Maxine of Hampstead; sisters-in-law Debbie Reynolds of Pleasant Garden and Jane McLaurin of Greensboro; and several nieces and nephews. Alton had a 41-year career with Blue Bell/VF, beginning in the shipping department and working his way through the cutting, pattern and sewing machine mechanic departments. He eventually became Division Maintenance Manager in the Micaville/Spruce Pine area. He then traveled internationally, leading a crew working on electrical and maintenance projects for the company and retired in 2000 as Corporate Shop Project Manager. Alton was an avid woodworker, sharing his skills through toy making, various furniture pieces and sturdy rocking horses for the church nursery and his grandchildren. For many years, he was known as WA4WJF or KB4EP to the ham radio community. He was a wonderful example of how to live what he believed, treating everyone with respect and never asking of anyone what he wasn’t willing to do himself. He was a gentle, quiet man who didn’t talk a lot but when he did, you listened to what he said. A memorial service celebrating Alton’s life will be held on Thursday, January 27 at 2:30pm in the sanctuary at Christ Wesleyan Church, 2400 S. Holden Road, Greensboro, NC 27407, with visitation to follow the service. In lieu of flowers, please consider a memorial gift to Authoracare/Hospice of Greensboro, 2500 Summit Avenue, Greensboro, NC 27405 or Christ Wesleyan Church at the address above.

The family of William "Alton" Ward created this Life Tributes page to make it easy to share your memories.

William Alton Ward ended his earthly journey peacefully in the...

Send flowers to the Ward family.