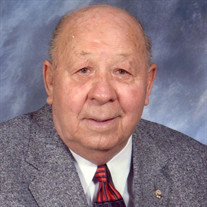 William Melvin “Bill” Twilley, age 94, of Greensboro, NC passed away peacefully on Sunday, April 3, 2022, with his loving children by his side. He is survived by his four children: Chuck and wife Jean Twilley, Sandra and husband Dean Thompson, Michael and wife Chryl Twilley, and Debbie and husband Chris Marshall. His loving grandchildren are Cameron and husband Ryan Sullivan, Todd Twilley, William Henry, Hannah Henry, Harriss Sullivan, Charlotte Sullivan, and Lily Sullivan. Bill was born March 24,1928, to Alonzo and Grade Mae Twilley, in the small town of Arlington, Alabama. He spent his childhood years in the Alabama countryside with his parents and nine brothers and sisters. Bill proudly served his country in United States Marine Corps. During his service, Bill was stationed in San Francisco where he met Betty, his wife and mother of his four children. After marrying, Bill and Betty relocated to Anderson, SC where he began his career with Duke Energy. For the next thirty-eight years, Bill enjoyed his work so much that he never took a single sick day, the ultimate testament to his work ethic and faithfulness. Bill had a deep love for his family and church. He was a devoted member of Lawndale Baptist Church. He served on various committees and was a member of the choir. He was happiest when spending time with family. He was the first to volunteer to help a neighbor or a friend. A highly skilled gardener and cook, he showed his love for family and friends through food. From chicken and dumplings to pecan pie, Bill enjoyed bringing people together with his cooking skills. He was also an avid sports fan and stayed true to his roots by cheering on any Alabama sports team. Bill’s wittiness and outgoing personality was contagious. He had an ability to find happiness in the simple things in life. His cheerful attitude and bright smile will be missed by those whose life he touched. Funeral services will be held at Lawndale Baptist Church on Wednesday, April 6, at 2:00 pm. Visitation with the family will be prior to the service at 1:00 pm.

William Melvin &#8220;Bill&#8221; Twilley, age 94, of Greensboro, NC passed away peacefully on Sunday, April 3, 2022, with his loving children by his side. He is survived by his four children: Chuck and wife Jean Twilley, Sandra and husband... View Obituary & Service Information

The family of William Melvin "Bill" Twilley created this Life Tributes page to make it easy to share your memories.

Send flowers to the Twilley family.