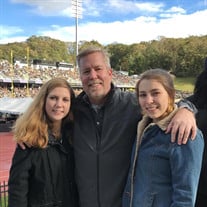 William “Bill” Southworth, a loving father, brother, and friend, unexpectedly passed away on Tuesday, September 28th, 2021. Born to John D. Southworth and Ruth Ann Southworth on November 29th, 1962 in the Chicago suburb of Northbrook, IL, Bill had a loving, joyful childhood spent alongside his family and numerous childhood friends. In 1981, Bill graduated from Loyola Academy and left Illinois to pursue a degree in Hotel Restaurant Management from the University of Denver (DU). In college, Bill was heavily involved in DU’s chapter of Lambda Chi Alpha. Despite the devastating loss of his father in 1984, Bill finished his degree and managed restaurants for a number of years in Dallas, TX and Chicago. After deciding that the hospitality industry was no longer for him, Bill found his calling in a position at Cone Mills in Greensboro, NC, beginning a nearly forty-year long career in textiles that allowed him to travel and live around the globe. Bill was a true “people person”; he loved making new friends and upholding the highest levels of integrity in both his work and personal life. Outside of work, Bill was entirely devoted to his two daughters, Megann and Lauren. Bill was the quintessential example of a devoted Girl Dad, and dedicated his life to making them happy. Most of Bill’s free time was spent traveling to and from volleyball games, going on vacations, visiting his girls at App State and UNC Charlotte, and occasionally getting pedicures (which, despite his initial protests, he actually loved!). For Bill, Megann’s and Lauren’s interests and aspirations came before his own and he was always quick to boast about their recent accomplishments to everyone he knew. Bill is survived by his two daughters, Megann and Lauren Southworth, his Mom, Ruth Ann Southworth, and his two brothers, Todd and John Southworth. He is preceded in death by his father, John D. Southworth. Bill will always be remembered for his upstanding character, humor, and heart. A celebration of life will be held at the Forbis and Dick Funeral Service Chapel at 5926 W Friendly Ave, Greensboro, NC 27410 at 2 pm on Saturday, October 16th, with a backyard reception to follow at the Southworth household. The service will be livestreamed for those who are not able to join us in person. If you plan on attending the backyard reception, please RSVP with Megann or Lauren Southworth. In lieu of flowers, monetary donations can be sent to Shea’s Chase, an annual 5k fundraiser that supports the Greensboro Mental Health Alliance. Donations in honor of Bill can be made through this link: https://sheaschase.com/donate/

The family of William Lynn Southworth created this Life Tributes page to make it easy to share your memories.

Send flowers to the Southworth family.