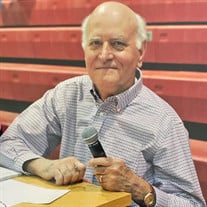 William Edwin “Ed” Phillips, Sr, husband, father, grandfather, brother, uncle, friend, and mentor passed away peacefully and surrounded by family on September 2, 2021; the 60th wedding anniversary of he and his loving wife Penelope “Penny” Glover Phillips. He is survived by Penny, his two sons Ed Phillips, Jr (fiance’ Kelly May) of Morganton, NC; Chris Phillips and daughter-in-law Melissa of Mooresville, NC; grandchildren Cassie (Andrew) Schweickert of Dover, DE; Anna (Christian) Cook of Wilmington, NC; Erin (Zach) Erickson of Fletcher, NC; and great grandchildren Henry Schweickert and Adler Schweickert; his sister Peggy Phillips Baird of Charlotte, NC; and numerous nieces and nephews. Ed was born in his Grandpa Doub’s farmhouse in the Baltimore Rd community of East Bend, NC on May 17, 1936 to parents Kermit Orvall Phillips and Inez Doub Phillips. He graduated from Harding High School in Charlotte, NC with the class of 1954, graduated from Charlotte College, and obtained a degree in Business Administration from Wake Forest College (University) in 1962. In 1947, at the age of 11, an attack of polio virus struck and Ed spent 8 months in the North Carolina Orthopedic Hospital in Gastonia. He recovered, and while his dreams of personal athletic prowess were dashed, his love and spirit for sports was not. As soon as he could walk again he became a regular fixture at Glenwood Recreation Center in Charlotte and found he could play half-court basketball. He later assisted the recreation director in operating programs for other youth. This led to him being heavily involved in sports and coaching throughout his life, including intramurals at Wake Forest. His teams won numerous championships among many sports in the independent leagues and competing against the fraternities. On Sep 2, 1961 he and Penny were married in the former First Baptist Church in Charlotte, which is now Spirit Square. Upon graduation from Wake Forest, he and Penny moved to Greensboro where Ed started a career with the American Insurance Companies, later becoming known as The Fireman’s Fund Insurance Companies. He immediately connected successfully with this profession and began a string of lifelong friendships both professionally and personally. In 1970 Ed helped found the Westbury Recreation Association in Greensboro where he worked tirelessly with neighbors “to get our kids off the streets” and into sports programs and activities. This program benefitted many boys and girls for years to come. It was his dream and persistence that led to the program’s success. He served as President of the association and Athletic Director. In 1975, Fireman’s Fund offered a promotion to Ed, and he packed up the family and moved to Davenport, IA, where he became Commercial Lines Manager. Westbury was so thankful of Ed’s leadership they established an annual award in his name to be given to the person most exhibiting his character and leadership. In 1977, Fireman’s Fund called again and offered Ed a promotion to Director of Commercial Lines Administration in the home office in San Francisco. But he always longed for North Carolina and to be back closer to family. This opportunity arose in late 1980 and he transferred back to Greensboro as Commercial Line Manager and eventually Executive Underwriter responsible for all business in the Carolinas. He laid the groundwork for enabling the growth of Fireman’s Fund insurance to large commercial accounts. In May 1993 he retired from Fireman’s Fund after 32 years of dedicated service to the company and industry. Through all these moves, he ensured the family found a church home, and he and Penny have been long-standing members of Muir’s Chapel United Methodist Church for 41 years. He participated in many activities including Administrative Council, Lay Leader, Men’s Committee, and Softball Coach, the latter while commuting back from Charlotte after Fireman’s Fund closed the Greensboro office. Throughout his life he managed to touch the lives of nearly everyone he met and encountered. He was a friend and supporter to countless people and the biggest cheerleader of Ed, Jr. and Chris. Among his many achievements he was also very proud of his 22 years he spent as the courtside announcer for Page High School Boys’ and Girls’ Basketball games, as well as Chairman of Greensboro Youth Baseball (Colt League). He and Penny were each other’s rock and best friends from the day they met until the day he passed. Through good times and not so good times, ups and downs, he was a sponge and learned from every experience. UNC-TV, Discovery, and History Channel were favorite programs. He once tried for Jeopardy, and he would have been a great contestant. If you asked Ed what in life made him the happiest, he likely would have said his family and especially his granddaughters and great-grandsons. Whether it was attending a ballgame, a family reunion, or a Sunday drive, he loved spending time with family. He thoroughly enjoyed sharing stories of his sons and grandchildren and beamed with joy about their activities. Ed believed he was fortunate in his recovery from polio and was guided by his faith and belief in helping others, and in the Boston Red Sox. Funeral service will be held at 2:00 pm on Monday, September 6, 2021 at Muir’s Chapel United Methodist Church, with visitation beginning at 1:00 pm. Burial will follow in the church cemetery. Guests are requested to wear masks. The family asks that you help keep Ed’s spirit and legacy alive by making a contribution to the Muir’s Chapel United Methodist Church Building Bridges fund (314 Muirs Chapel Rd, Greensboro, NC 27410), or the Bill White Scholarship Fund with Greensboro Youth Baseball (4285-1C Cedar Croft Ct, Greensboro, NC 27409).

The family of William Edwin "Ed" Phillips Sr. created this Life Tributes page to make it easy to share your memories.

Send flowers to the Phillips family.