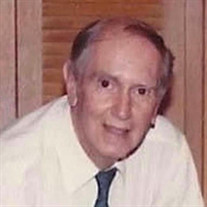 MOORESVILLE - William Kellam Oden, Jr. went home to the Lord on October 31, 2021. Bill was born May 13, 1929, in Greensboro, NC. He was a lifelong member of West Market Street United Methodist Church. Bill attended Greensboro High School, where he developed a lifelong love of the trombone. He then graduated from Guilford College, where he studied History, another great passion of his. After college, Bill served in the US Navy as a 1st lieutenant on the USS Roanoke. He loved telling us about his adventures in the Navy. After the Navy, Bill graduated from Duke Law School. He was a proud member of the Greensboro Bar Association and enjoyed a long career with Allstate Insurance Company. Bill’s greatest times were spent playing the trombone in the Greensboro Symphony, dance bands, and the church orchestra. He particularly loved playing in the Barnum and Bailey circus band each year when they came to town, and other shows. Bill loved his four children fiercely. He loved teaching his daughters to play the French Horn and coaching his two sons in baseball. He especially loved spending time together at Ocean Isle Beach, NC, where he had a second home. Bill sent all of his children to college and was very proud of them. Bill had a great love for dogs, especially in his later years. Some of his favorites were Dandy, Blackie, Missy, Molly, Dixie and lastly, Dixon. He walked many a mile with his furry friends. Bill also adored his home and the surrounding woods. It brought him great joy to be outside and enjoy nature. He was lucky to be able to stay at his home until the end, enjoying life on his own terms. Bill was preceded in death by his parents, William Kellam Oden, Sr. and Wanda Haddock Oden, his sister, Beverly Oden Crain, and his newborn son, Donald Jennings Oden. He is survived by his four children, daughter Amanda Oden Tinsley (Jim) of Mooresville, NC, daughter Julia Oden Thornton (Jon) of Charleston, SC, son William Kellam Oden III (Jan) of Greensboro, NC, and son John Earnhardt Oden (Kathleen) of Wilmington, NC. Bill is also survived by 13 grandchildren: Jennings Tinsley(Amy), Charles Tinsley (Maggie), Amanda Morgan (Eric), Mary Beth Shrom, Rebecca Shrom, Charlotte Oden, Kellam Oden, Mary Garner Oden, Jack Oden, Lawson Oden, Anna Oden, John Oden Jr, and Lily Oden; and 3 great-grandchildren: Bo Tinsley, Etta Tinsley, and Reese Tinsley. The family wishes to thank S Mitchell Mack Hospice House, Mooresville, NC, for his end-of-life care. Bill’s Celebration of Life will be at New Garden Friends Cemetery, 801 New Garden Road, Greensboro, NC 27410, on Friday, November 5th at 2:30 p.m. In lieu of flowers, the family asks that memorials be made to New Garden Cemetery Association (address above) and SPCA of the Triad, 3163 Hines Chapel Rd, Greensboro, NC 27405. Forbis and Dick Guilford Chapel is serving the family.

The family of William Kellam Oden Jr created this Life Tributes page to make it easy to share your memories.

Send flowers to the Oden family.