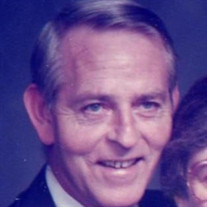 Not sure what to send?

William Wolff "Bill" Jones, 86, of Pleasant Garden passed away peacefully on January 15, 2022 at Clapp's Nursing Home in Pleasant Garden. He was preceded in death by his wife, Malinda Carroll Jones, parents John Nathaniel and Mary Ann Allen Jones, sisters, Carrie Hobbs and Mae Reitzel, and brothers, Bernerd, Robert, Henry and Fred Jones. He is survived by his son, Philip Allen Jones and wife, Jori of Greensboro, NC, Grandsons - Philip Adam Jones and wife, Natalie, of Mooresville, NC, and Samuel Joseph Jones and wife, Kelly, of Columbia, SC. Great grandchildren Olivia, Jack and Hayes Jones, and also by many nieces and nephews. Bill married the love of his life, Malinda Carroll, on May 8, 1955. He served as a sergeant in the Army National Guard and was honorably discharged in 1961. He later managed the concession stand at Ritter's Lake, and then acquired Ritter's Lake Curb Market. He operated it until he retired in 1999. The family will receive friends on January 25, 2022 at Bethlehem United Methodist Church in Climax, NC from 12:00 until 1:00. That will be followed by funeral services at 1:00. Burial services will follow at Guilford Memorial Park. In lieu of flowers, the family is asking for donations to be made to the Bethlehem United Methodist Missions team.

The family of William W. "Bill" Jones created this Life Tributes page to make it easy to share your memories.