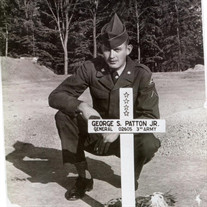 William Guthrie “Cowboy” Brown, 92, passed away Saturday, July 3, 2021 at Moses Cone Memorial Hospital. A funeral service will be held Friday, July 9, 2021, 10:30 AM at Forbis and Dick Guilford Chapel, 5926 W. Friendly Ave., Greensboro, NC 27410. The family will receive friends from 9:30 – 10:30 AM before the service at the funeral home. William was born October 21, 1928 to the late Walter H. Brown and his wife, Annie Evans Brown at the historic landmark, Guilford Battleground in Guilford County, NC. He later served in maintenance of that same historic site for over 30 years. He also served his country in the U.S. Army in Germany during the Korean conflict. He also served his community as a volunteer fire fighter with the Guilford College Fire Department. In addition to his parents, William was preceded in death by his wife of 65 years, Betty Brown. Survivors include his son, Keith Brown (Nancy); daughter, Denise Alexander (Randy); grandchildren, Kyle Alexander (Samantha), Lori Wilson (Timothy), Jessica Brown and Mackenzie Brown; great-grandchildren, Braxton and Charlie Alexander and Tallen Wilson; and sister, Ethel Elliott. The family would like to express their special thanks to his caregiver, Hazel Holloway and the staff at Olympic Restaurant in Colfax, NC. In lieu of flowers, donations may be made to Guilford Courthouse National Military Park in memory of William G. Brown. Forbis and Dick Guilford Chapel is serving the family and online condolences may be offered at www.forbisanddick.com.

The family of William G. "Cowboy" Brown created this Life Tributes page to make it easy to share your memories.

Send flowers to the Brown family.