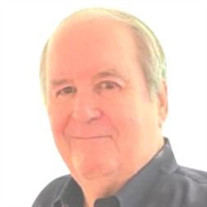 GREENSBORO - William Stewart Black (“Bill”), 72, died Thursday in Greensboro, NC. Born in Greensboro in 1950, to parents Margaret and William Black (deceased), Bill attended Grimsley High School, graduating in 1968. He went on to study at the University of South Carolina in Columbia, SC, where he became a proud member of the Sigma Chi fraternity, and a big fan of the Gamecocks. He later finished his degree at Elon University. After college, he built a successful career in Sales at Roadway Corporation, Overnite Transportation, and Watkins Trucking Co. An entertainer at heart, Bill enjoyed playing golf with his clients and taking them out to dinner and drinks. One faithful night in 1985, after he had moved back to Greensboro, Bill ran into his future wife Debi while out with friends. Having known each other through mutual friends since high school, they were happy to reconnect, and got married in 1986. They completed their family with the arrival of their son William in 1989. In Bill’s retirement, he loved spending his days on various hobbies, taking long walks with his wife, reading military history, and watching classic movies. John Wayne westerns were among his favorites, and so was the Andy Griffith Show. Bill’s love for his son knew no boundaries. Always ready to play, be silly, or get up to no good when Will was a child, to fanatically discussing politics and military history as he grew up, those two had truly become best buds. They loved (to hate) their Dallas Cowboys. Dogs held a special place in Bill’s heart, and there were many beloved creatures over the years. Bill’s lap, while sitting in his favorite leather armchair, was the most coveted spot in the house. Bill loved traveling with his family; cruising around Alaska, exploring Greece and Turkey, and tasting the best wines in France or Italy. He sure loved his wine. His favorite trips, however, might have been the annual getaways to NC mountains and beaches. A tour of the civil war battlefields in Pennsylvania, Maryland, and Virginia with his son in 2016 also tops the list. Bill was a loving husband, father, grandfather, brother, and friend. He is survived by his wife, Debra Stockton Black (Greensboro), his sister Barbara Black-Grey (Florida), his son William Black, daughter-in-law Marly Lutters Black, and granddaughter Amalia Martina Black (Durham). Please celebrate his life by raising a glass in his memory. The family will plan a memorial to honor Bill at a later date. In lieu of flowers, we ask you to donate to the American Battlefield Trust, Post Office Box 1751, Merrifield, VA 22116-1751. Forbis and Dick Guilford Chapel is serving the family.

The family of William Stewart "Bill" Black created this Life Tributes page to make it easy to share your memories.

Send flowers to the Black family.