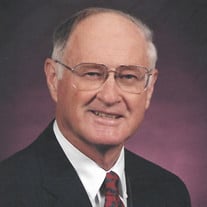 Wilford Allen (Dub) Leonard, 93, passed away peacefully at home on May 7, 2021. A celebration of life will be held on Thursday, May 13, at 11:00 AM at Christ United Methodist Church, 410 N. Holden Rd, Greensboro, NC. A reception will be held following the service in the Fellowship Center at the church. Due to Covid-19 precautions the church is limiting the number of guests to 100. Dub was born in Davidson County, NC, on June 21, 1927 to William Thomas Leonard and Gladys Mae Walser Leonard. The second of five children, he was preceded in death by brothers Paul and Bobby. He is survived by his sisters Betty Sue Younts and Barbara Ann Alley. Growing up on a farm outside of Welcome, NC during the Great Depression taught Dub the importance of hard work and thriftiness. Having excelled in school, Dub knew he needed to go to college to make a good life for himself. In August 1944 Dub was accepted into the Army Air Force Enlisted Reserve program at Clemson University. In the spring of 1945 the program was discontinued but the draft for 18 year olds was still in place. Dub qualified for a program called Electronics Technician Mate and he joined the Navy in April of 1945. After the war with Japan ended Dub was discharged in July 1946. Thanks to the G.I. Bill, Dub enrolled at N.C. State in the fall of 1946. In the fall of 1947, he transferred to Catawba College to pursue a Bachelor of Arts degree in mathematics. He began his career as a mathematics teacher and football and basketball coach at Southern Pines High School in the fall of 1949. There he met the love of his life Lillian Rosenberger. They married on August 30, 1951 and began building their family. Dub taught and coached for ten years in Southern Pines, during which time he also earned his Masters of Education degree in 1953 from UNC-Chapel Hill. In 1959 Dub began a new career as an actuary at Jefferson Standard Life insurance Company in Greensboro, NC. After seven years working full-time and many hours of studying, Dub passed a series of grueling exams, each the first time, and became a Fellow in the Society of Actuaries. Dub was promoted multiple times, serving his last four years as the Chief Actuary and Executive Vice President. He was a very active father, teaching his children life skills and a love of being outdoors. He enjoyed whitewater canoeing, playing tennis and participated in other activities at the Jefferson Club with his family. After 33 years of dedicated service Dub retired on June 30, 1992. Dub told Lillian that he had been working since he was four years old and it was time to start traveling. They started with a two-week trip in the Canadian Rockies in 1993. Their travels continued in the US and abroad. Dub often organized trips with his family and delighted in reminiscing over pictures and notes from the trips. Annual trips to Oak Island, N.C. with the entire Leonard family have become a powerful tradition through three generations. In retirement Dub spent many hours volunteering. He mentored children at Hunter Elementary and participated in a free income tax service for low-income and older taxpayers. He was an active member of the Greensboro Kiwanis Club and the Piedmont Taurus Group investment club for many years. Dub is survived by his children, Betsy Wiens (Fred), Cathy Lacienski, Nancy Napier (Stan), Bill Leonard (Helen) and Allen Leonard (Michelle); grandchildren Luke Wiens (Christy), Amber Hipp (Tom), Nicholas Lacienski (Catherine), Patrick Lacienski, Wayne Napier (Chasidy), Jessica Morgan (Mark), Molly Leonard, Megan Leonard, Lindsay Leonard, Jacob Leonard, and Ashley Leonard; and six great-grandchildren. Dub considered himself very fortunate to live a blessed, fulfilling life. He was exceedingly proud of his family and wonderful friends. In lieu of flowers the family requests memorials to either to the Grimsley High School Alumni Association Foundation (PO Box 4241, Greensboro, NC, 27404) to establish a scholarship for a student pursuing an education degree or Communities in Schools of Greater Greensboro (122 N Elam Ave,, #301, Greensboro, NC 27401). Forbis and Dick Guilford Chapel is serving the family and online condolences may be offered at www.forbisanddick.com.

Wilford Allen (Dub) Leonard, 93, passed away peacefully at home on May 7, 2021. A celebration of life will be held on Thursday, May 13, at 11:00 AM at Christ United Methodist Church, 410 N. Holden Rd, Greensboro, NC. A reception will be held... View Obituary & Service Information

The family of Wilford A. "Dub" Leonard created this Life Tributes page to make it easy to share your memories.

Send flowers to the Leonard family.