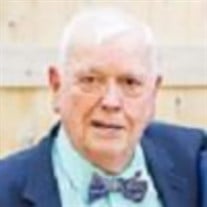 Greensboro- Wayne L. Stutts passed away Friday July 9, 2021 at Moses Cone Hospital. A Funeral service will be held at 11:00 AM Wednesday July 14, 2021 at The Chapel of Canterbury School. Wayne was born October 2, 1936 in Greensboro. Growing up, Wayne loved baseball and was the batboy for the Greensboro Patriots while he was a teen and was there when Jackie Robinson came through in 1950. Wayne served as a cook in the National Guard. After attending Umpire School, he became a Minor League Professional Umpire. Wayne married Joyce Anderson on November 16, 1956 and had 58 wonderful years of marriage until her death on June 24, 2015. He worked for Kirkman Koury, Southern Mapping Surveying and Engineering, City of Greensboro Surveying and partnered with Trulove Engineering and Carolina Surveyors. Wayne began his own surveying company and traveled the east coast doing Geodetic Surveying. He also worked all over Florida as a subcontractor for Brevard Engineering doing Control Surveys on such projects that included work on the initial Disney World boundary survey and the NASA Bicentennial at Kennedy Space Center in 1976. Wayne returned home in 1977 to begin a new local surveying company, Wayne L. Stutts, PA. He also received his general Contractors License and built numerous houses. Along the way, Wayne developed subdivisions as well as building a large portfolio of rental homes. He was a proud and active member of Alcoholics Anonymous since August 23, 1977. Wayne was proud to have founded the Lighthouse Ministry, a halfway house for newly sober members of AA and NA. He constructed the Renewal Center of the South, a spiritual Retreat Center for the 12-step community and served on the board. He was proud to serve on the 12th step call list for Intergroup and Fellowship Hall. Wayne loved his family dearly and enjoyed creating memories at their home on Oak Island and on vacations to various destinations. Wayne was an avid English Bulldog enthusiast and if you saw him driving his truck around town, you were guaranteed to see one in the passenger seat. Wayne is preceded in death by his loving wife, Joyce A. Stutts. He is survived by his children, Teresa Johnston and Joseph “Jody” Stutts (Lisa), Grandchildren Jennifer S. Pack (Josh), Eric A. Johnston (Cecelia), Nicole S. Edwards (Andrew), Dylan Wayne Stutts and Fiancé Makenzie Taylor, as well as 3.5 Great Grandchildren. The family will receive friends from 9:30-10:45 AM on Wednesday July 14, 2021 before the service. In lieu of flowers memorials may be made to Alcoholics Anonymous Intergroup at 4125-C Walker Avenue, Greensboro, NC 27407; Revolution Masonic Lodge #552, 802 16th Street; Greensboro, 27405 or Fellowship Hall for Joyce Stutts Garden; 5140 Dunston Road, Greensboro, NC 27415.

Greensboro- Wayne L. Stutts passed away Friday July 9, 2021 at Moses Cone Hospital. A Funeral service will be held at 11:00 AM Wednesday July 14, 2021 at The Chapel of Canterbury School. Wayne was born October 2, 1936 in Greensboro. Growing... View Obituary & Service Information

The family of Wayne L. Stutts created this Life Tributes page to make it easy to share your memories.

Send flowers to the Stutts family.