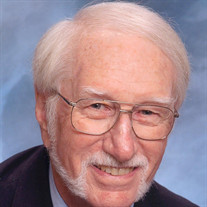 Dr. W. Barnes Tatum, age 78, passed away on August 26, 2016 at Beacon Place with his wife by his side. Funeral services will be held at 2:00 p.m. on Tuesday, August 30, 2016 at Christ United Methodist Church with the Reverend Mark Vickers officiating. Dr. Tatum was born in Mobile, Alabama to the late Walter Barnes and Zelle Daly Tatum, Sr. He attended Birmingham-Southern College in Birmingham, Alabama and received a Rotary Foundation Fellowship for a year’s study at St. Mary’s College, University of St. Andrews, Scotland. He earned his Ph.D. from Duke University in 1966. Born out of his love for historic and rare books, he also attended the University of North Carolina at Greensboro where he earned a Master of Library Science. Dr. Tatum began his career in 1966 as a faculty member at Huntingdon College in Montgomery, Alabama where he became Chair of the Department of Religion in 1970. He also received the John W. Frazer Faculty Award in 1970. In 1973, Dr. Tatum joined the faculty of Greensboro College as Professor of Religion and Philosophy. He also served as Dean of the College from 1983 to 1987. In 2001, he was named Jefferson-Pilot Professor of Religion and Philosophy. During his tenure, Dr. Tatum received the Outstanding Teacher Award in 1980, was awarded the Moore Award Professorship of Greensboro College in 1993-1994 and the United Methodist Exemplary Faculty Award in 2001. As a published author, Dr. Tatum’s books on the life of Jesus have been used extensively in colleges and universities. Many of his works have appeared in academic journals and publications and he was a featured contributor to the Encyclopedia of the Bible and Its Reception. His stature as a leading authority on the depiction of Jesus in film led to invitations to serve as on-air commentator for television broadcasts by AMC (American Movie Classics), The History Channel, BBC and EO-Television. He has also written for United Methodist publications and has been a well known speaker on both the local and international stage. He has participated in Society of Biblical Literature international meetings, the World Methodist Conference, and has been a frequent presenter at the conferences of the American Academy of Religion. He is a Fellow of The Jesus Seminar, Westar Institute. Dr. Tatum was a life-long advocate for civil rights and equality involving race, gender and faith as evidenced in his lectures and courses designed to address current issues. He served as a sponsored Lecturer with the North Carolina Humanities Council in the mid 1990s. As a student of history, Dr. Tatum enjoyed researching and visiting historic cemeteries in the southeast. He enjoyed baseball and was a regular supporter of the Greensboro Grasshoppers. He was proud of his Methodist heritage and visited historic Methodist sites throughout the U.K. He is a charter member of St. Timothy’s United Methodist Church. Dr. Tatum is survived by his loving wife of 23 years, Linda Woodard Tatum; sons Chris Tatum (Sheri) of Charlotte and Rob Tatum (Jason Baxter) of San Francisco; stepsons Chris Wilson (Ai) of Tokyo, Japan and Hal Wilson (Georgia) of Statesboro, GA; grandchildren, Chloe and Connor Tatum, Lanie Gray, Virginia Mae and Hanna Wilson; and sister, Karla Dooling (Jerry) of Dothan, Alabama. The family will receive friends at Christ United Methodist Church beginning at 12:30 p.m. Those wishing to honor the memory of Dr. Tatum may make memorial donations to Greensboro College, 815 W Market St, Greensboro, NC 27401 or to St. Timothy’s United Methodist Church, 5228 Hilltop Road, Jamestown, NC 27282. Forbis and Dick North Elm Street Chapel is serving the Tatum family and online condolences may be offered at www.forbisanddick.com

Dr. W. Barnes Tatum, age 78, passed away on August 26, 2016 at Beacon Place with his wife by his side. Funeral services will be held at 2:00 p.m. on Tuesday, August 30, 2016 at Christ United Methodist Church with the Reverend Mark Vickers officiating.... View Obituary & Service Information

The family of Dr. Walter Barnes Tatum created this Life Tributes page to make it easy to share your memories.

Send flowers to the Tatum family.