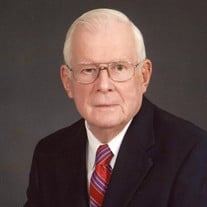 Walter Lawrence “Sam” Salmon Jr. passed away from this life peacefully in his sleep on January 27, 2022 with his family by his side at the age of 91 to spend eternity with The Lord God, and his beloved bride Dot. Mr. Salmon was preceded in death by his wife of 42 years, Dorothy (Dot) Lowe Salmon, his parents Walter L. Salmon Sr., and Alice Nichols Salmon, and a senior life special friend Bonnie Barker. Mr. Salmon is survived by: his sister, Francis Salmon Niblock; son, Charles L. Salmon; daughter-in-law, Leigh Ellen Salmon; daughter, Susan Salmon Welborn; son-in-law, Joe Welborn; and son, Edward L. Salmon. Also, grandchildren: Matthew Salmon (Ellen), Mark Salmon, Micah Salmon, Jacob Welborn (Casie), Justin Welborn, Alice Salmon Jariz (Craig), and Andrew Salmon. In addition, he had two great grandsons, and numerous nieces and nephews. His favorite pastimes were playing golf and studying God’s Word. He enjoyed spending time with family and friends, reading, crossword puzzles, exercising at the YMCA, hunting of any type, and watching golf. He was an active and founding member of Southeast Baptist Church where he particularly enjoyed teaching and meal preparation ministries. He was also involved in many other ministries throughout the community. He proudly served in The United States Air Force, on the Guilford County Board of Education, with the General Greene Council of the Boy Scouts of America and the Masonic Lodge. Before graduating as Civil Engineer from Virginia Polytechnic Institute in 1959, he began his career as a field clerk with Thompson Arthur Paving Company. Continuing with that career after graduation as an engineer, he filled many roles with increasing responsibilities, and retired after 39 years of service as President of the Company. During his career he was active in the Carolina Asphalt Pavement Association, and the Associated General Contractors. He was blessed to have worked with many dedicated coworkers, employees, professionals, and wonderful friends who constructed and paved roadways throughout North Carolina, South Carolina, and Virginia. In lieu of flowers, memorial donations may be made to the Baptist Children’s Homes of NC, PO Box 338, Thomasville, NC 27361. Forbis & Dick Pleasant Garden Chapel is serving the family.

Walter Lawrence &#8220;Sam&#8221; Salmon Jr. passed away from this life peacefully in his sleep on January 27, 2022 with his family by his side at the age of 91 to spend eternity with The Lord God, and his beloved bride Dot. Mr. Salmon was... View Obituary & Service Information

The family of Walter L. "Sam" Salmon, Jr. created this Life Tributes page to make it easy to share your memories.

Send flowers to the Salmon, family.