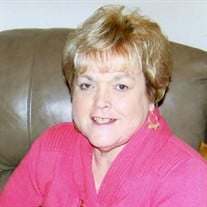 Gail Everett Price Mrs. Gail Everett Price, 75, of Greensboro, NC, passed away at her home on Saturday, September 25th with her loving husband by her side. Visitation will be held on Monday, October 4, 2021 beginning at 10:00 a.m. with a memorial service celebrating her life immediately following at 11:00 in the Guilford College Chapel at Forbis and Dick Funeral Service, 5926 West Friendly Avenue, Greensboro, NC 27410. Gail, a native of Greensboro, was born June 14, 1946 to the late Gilmer and Cora Brown Everett. She was a member of the 1964 graduating class of Northwest Guilford High School. After high school, Gail attended cosmetology school and began a lifetime career as a hairdresser. She operated her own salon for nearly 54 years, only retiring a year ago when her health began to fail. Gail was a devoted and loving wife, sister, aunt, great aunt, and Godmother whose gentle spirit will be greatly missed by all who knew her. She dearly loved her family and made all her friends feel like family. Gail was a woman of strong faith for her Lord and Savior and she attended Ebenezer Lutheran Church. Those left to cherish her memory include her devoted husband of nearly 56 years, Robert “Bob” Price, Jr.; sister, Brenda Redmon and husband Alan of Greensboro; numerous nieces and nephews; her Godchildren and countless friends. In addition to her parents, Gail was preceded in death by her infant daughter, Mary Elizabeth and sister Shirley Sams. In lieu of flowers, memorial contributions may be made to the charity of the donor’s choice. The family is being served by Forbis and Dick Guilford Chapel and online condolences may be offered at www.forbisanddick.com

Gail Everett Price Mrs. Gail Everett Price, 75, of Greensboro, NC, passed away at her home on Saturday, September 25th with her loving husband by her side. Visitation will be held on... View Obituary & Service Information

The family of Virginia Gail Everett Price created this Life Tributes page to make it easy to share your memories.