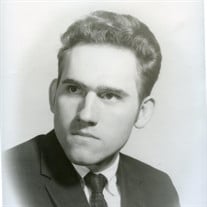 Tommy Ray Stewart of Greensboro, NC passed away on June 18, 2021 at Moses Cone Memorial Hospital after a brief illness. A native of Wise County, VA, Tommy was the sixth and youngest son of Winfield Scott Stewart, a coal miner, and Daisy Bell (Clark) Stewart, a homemaker. He was preceded in death by his mother and father, his five older brothers, wife Patricia (Robertson), and his infant daughter, Tammy Maria. He is survived by older son, Tommy Jr. (Ray), his wife Cathryn, granddaughter Hannah, and his younger son Robert Clayton II (Robby), his wife Diamond, and grandsons Landon and Luke. Tommy attended J.J. Kelly High School in Wise, VA and the National School of Meat Cutting in Toledo, Ohio. He worked for over 45 years as meat cutter in grocery stores in the Triad area including Colonial, Kroger, Big Star, and Food Lion Food Stores. Tommy was a proud union man for most of his 45 working years as a member of the United Food and Commercial Workers. Tommy was a lifelong straight ticket Yellow Dog Democrat and a huge baseball fan, having played as a second baseman in high school. He loved the Philadelphia Phillies, who brought a lifetime of both joy and frustration. As a Phillies fan, he also hated the Atlanta Braves and the New York Yankees and felt a great deal of happiness when they lost. Tommy was immensely proud of his sons, both of whom became Eagle Scouts, his granddaughter, and his grandsons. Although he was never fortunate enough to be able to afford a college education, he was a voracious reader and placed a great deal of value on education, especially reading. He constantly touted the value of a rigorous education or learning a skilled trade. He deeply believed that all types of hard work and labor were honorable, and he despised personal and intellectual laziness. A Memorial Service for family and friends will be held in his honor at the Forbis & Dick Funeral Service - Guilford Chapel on Sunday, July 11, 2021 at 2 PM. In lieu of flowers, his family asks that you make a donation in his honor to the charity of your choice.

Tommy Ray Stewart of Greensboro, NC passed away on June 18, 2021 at Moses Cone Memorial Hospital after a brief illness. A native of Wise County, VA, Tommy was the sixth and youngest son of Winfield Scott Stewart, a coal miner, and Daisy Bell... View Obituary & Service Information

The family of Tommy Ray Stewart Sr. created this Life Tributes page to make it easy to share your memories.

Send flowers to the Stewart family.