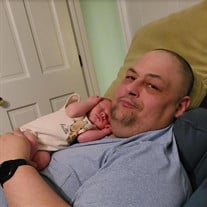 Thomas “Tommy” Robert Lyle Jr. passed away suddenly at his home on Monday, September 27 2021 after a year- long battle with Leukemia. He is remembered fondly by his wife and best friend, Holly Lyle, his adopted daughter, Jessica Mozingo, his beloved granddaughter, June Mozingo, his three brothers: Kevin, Joey and Brian, and a large extended family that he loved dearly. Tommy was known for being able to make a friend wherever he went, and will stay in the hearts of many people. He fought cancer with a smile, always trying to brighten the days of the nurses while he was undergoing chemo and telling them about the impending arrival of his first grandchild, who he was fighting so hard for. We are thankful that he did get to celebrate several events he was not sure he would be able to experience, including celebrating his 50th birthday, traveling to Mooseheart to receive his Pilgrim Degree of Merit, walking his daughter down the aisle, and meeting his granddaughter. His two passions in life were the Jacksonville Jaguars (even when they lost, which happened quite often) and the Moose. Tommy was always willing to help anyone in need and before his illness was often seen at the New Garden Moose Lodge volunteering at meals and bingo. He was so happy that he was able to attend meetings and start to volunteer his time again after his bone marrow transplant. He was a member for 13 years, holding several positions on various boards within the organization. He received his Pilgrim Degree of Merit, their highest honor, on June 5, 2021. His greatest love was his grandbaby June- even in the darkest of times he never gave up fighting because he wanted to be here for her. Even though they only had a couple of months together, there was an instant bond that none of us had- we dubbed him the “baby whisperer” because he could calm her and get her to sleep when no one else could. A celebration of life will be held on Sunday, October 17, 2021 at 2PM at the New Garden Family Center #1884, located at 1800 New Garden Road, Greensboro NC 27410. Masks will be required for entry. In lieu of flowers, donations can be given to the Leukemia and Lymphoma Society or to the Lyle family.

Thomas &#8220;Tommy&#8221; Robert Lyle Jr. passed away suddenly at his home on Monday, September 27 2021 after a year- long battle with Leukemia. He is remembered fondly by his wife and best friend, Holly Lyle, his adopted daughter, Jessica... View Obituary & Service Information

The family of Thomas Robert Lyle Jr. created this Life Tributes page to make it easy to share your memories.

Send flowers to the Lyle family.