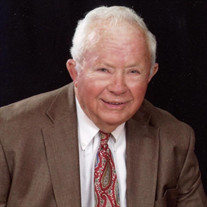 Mr. Thomas “Tom” Johnson, 86, passed away Tuesday, April 19, 2022, at his residence. He was born in Montgomery County, Maryland, to the late Arthur R. and Anna M. Johnson. Attended Damascus High School in Damascus, Maryland He was Senior class President and excelled in baseball and basketball in the class of 1954. A 1958 graduate of the University of Maryland with a Dairy Husbandry degree. Member of Alpha Gamma Rho Fraternity. Served two years in the U S Army stationed in Germany. Upon his discharge he was employed by Sealtest Foods in Charlotte North Carolina for six years as an Ice Cream Production Manager. During this period Tom met and married his lovely and wonderful lifetime partner, Doris Mason, who referred to him as “Mr. Wonderful”. The next twelve years he worked for APV Crepaco as a territorial Sales Representative and Engineering Trainee. In March of 1979, Tom was employed by M. G. Newell Corporation in Greensboro. He was hired as Sales Manager and one of his first challenges was to expand the market of Newell from a Dairy Supply company to a system-oriented provider to also encompass and include the Food and Pharmaceutical Industries. This was successfully completed by increasing the staff of the company to include an Engineering Group. During the next five years sales increased by 60% and profit margins grew at a very substantial rate. In November of 1984, the company was purchased by John and Sally Sherrill, Tom Johnson, and Jack Fleming Jr. This ownership remained intact until 1994 when the company was purchased outright by the Sherrill family. During the ten years of minority ownership Tom served as Sales Manager, Engineering Manager and Vice President. His later years with the company was served in the role of Project Engineer. Tom retired on December 31, 2019, after 39 years and 9 months of dedicated service. During this period Tom designed and installed new processing plants in Anniston Alabama, Hammond Louisiana, and Baxley Georgia. He was also instrumental in the expansion and upgrades of several Dairy and Beverage Plants in the Southeastern United States reaching from Fort Worth Texas to Miami Florida and as far north as Baltimore Maryland. Some of Tom’s career accomplishments include the recipient of the Tri-State Distinguished Service award as man of the year, Tri-State year 2000 Supplier of the year, President of the North Carolina Dairy Products Association, North Carolina Dairy Foundation and President of the 25ers club of the NCDPA. In his church he has served on several committees that include two terms on the Finance Committee, Administrative Council and Stewardship Committee. Tom loved yardwork, playing golf and his furry pets. Tom enjoyed watching his four grandsons play sports over the years. Some of things that made him smile, was watching his oldest Grandson Trey graduate from Texas Tech University and continuing a successful career. Being called “Papa Savage” by Chase and Matthew and of course playing board games with his youngest grandson Seth and playing by “Seth’s Rules”. Tom enjoyed his family and looked forward to the Christmas Eve Candlelight service at Pleasant Garden United Methodist Church and returning home to Doris’s traditional Prime Rib Christmas Eve Dinner. In addition to his parents, he was preceded in death by three brothers, Robert (Mack) Johnson, Donald R Johnson, and Charles Johnson. He is survived by his wife Doris, his sons, Tony Johnson of Greensboro, Rick Johnson (Bobbie) of Randleman and his daughter Debbie Johnson of Wendell, NC, four grandsons; Trey Johnson of Miami Fl., Chase Johnson, Matthew Johnson and Seth Johnson, brothers, James Johnson (Betty) of Clarksburg Md, Arthur Johnson Jr. (Peggy) of Dickerson, Md, George Johnson (Pam) of Clarksburg, Md. and Barbara Johnson, sister in law of Damascus, Md., numerous nieces and nephews and our special Sis, Cheryl Pillow (Barry) and Honorary friends Robin “Big Bird” and Pat Jones and Jack (Shirley) Fleming for the countless love and support. Tom has filled many hearts with his love, compassion and mentorship throughout his life and will be missed by many. His family would like to give a special thank you to Summer Kearns and Gratchel Cassidy for the love and devotion that they have given to their dad during his last months. A funeral service will be held at 2:30 pm on Saturday, April 30, 2022, at Pleasant Garden United Methodist Church. The visitation will be held one hour prior to the service at the church. Online condolences may be offered at www.forbisanddick.com.

The family of Thomas "Tom" Johnson created this Life Tributes page to make it easy to share your memories.