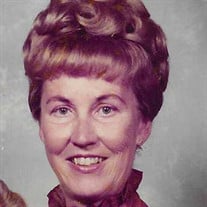 MOCKSVILLE - Mrs. Sylvia Jo Gentry McClamrock Kennedy, 88, of Forest Lane, left for her eternal home on April 11, 2021. Sylvia was born November 6, 1932 to Rev. Joe Cephus Gentry and Dora White Gentry while Rev. Gentry was appointed to the Bakersville, NC circuit. Sylvia grew up as a Methodist minister’s daughter with a new home every two years. She graduated from Sandy Ridge High School and worked at Western-Electric in Winston-Salem where she met and married Grady L. McClamrock, Sr. She later married Knowles Kennedy of Sylva, NC, who preceded her in death along with her parents; her sisters, Lois Anglin, Rebecca Carter, and Pauline Ernest; and brothers, Hampton W. Gentry and John Wesley Gentry. Sylvia is survived by her dear companion, Ron Cotterman (son, Jeff) of Statesville; two sons, Grady L. McClamrock, Jr. and wife, Cathy and Buddy (Larry Joe) McClamrock; grandchildren, Grady L. McClamrock, III (Huong), Adam Wesley McClamrock (Felicia), Anna Elizabeth McClamrock Roth (Chris), Joseph Gray McClamrock, Mitchell Edward Garner (Regina), and Micah Ethan Garner (Erin); and six great-grandchildren, Madison Grace McClamrock, Olivia Carolyn McClamrock, Sinclair Ann McClamrock, Ava Noel Garner, Isla Jade Garner, and Cub Wesley McClamrock; and one sister, Barbara G. Harris (Paul) of Ovieda, FL. Sylvia was known by most to be an energetic, hardworking and independent minded little lady who always knew where she was going and was always going somewhere. Sylvia spent a large portion of her life and energy taking care of her sister, parents, aunt, grandchild, husband and friends during their time of need. She played outdoors at every opportunity and always had a vegetable or flower garden for friends and visitors to share and enjoy. She enjoyed finding and collecting antiques especially clocks. She turned trash into treasures by “remodeling” some Goodwill item into a prized possession by her detailed painting and artwork which she often gave to a grateful friend or family member. As an adult, Sylvia lived in Mocksville, Winston-Salem, Lewisville, Sylva, and Raleigh and finally returned to Mocksville later in life. Sylvia was the prettiest grade-mother in her sons’ schools and handmade clothes and suits for them. She once made matching jackets for all of Grady Jr’s band members. She was a charter member of the Mocksville Women’s Club, member of the Faithful Workers Sunday School class and First United Methodist Church of Mocksville, NC. Sylvia was very proud of her children and grandchildren and would keep everyone updated of their accomplishments. She made friends everywhere she went and greatly appreciated the care, prayers and concerns of her new church family and friends in Mocksville. Especially precious to her was her constant companion and caretaker Ron Cotterman who Sylvia said “was sent to her from heaven”. Before her death, Sylvia had a vision of her parents and Savior in heaven and she was ready to join them there. While her family and friends grieve for our loss, Sylvia is at home now, free from life’s burden and we rejoice with her. At her request, no service will be held. Memorials may be considered for Trellis Supportive Care, 101 Hospice Lane, Winston-Salem, NC 27103 or Somerset Court of Mocksville c/o Amy Shearer, 150 Ken Dwiggins Drive, Mocksville, NC 27028. Online condolences may be made at www.eatonfuneralservice.com.

The family of Sylvia Gentry McClamrock Kennedy created this Life Tributes page to make it easy to share your memories.

Send flowers to the Kennedy family.