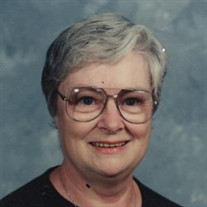 GREENSBORO - Suzanne Strom Wotring passed peacefully during hospice care on the afternoon of March 28, 2021. She was born to her parents, Oscar Strom and Florence Barnes Strom, in Chicago, IL on July 13,1933. Known to most as Sue, she began her childhood on a farm in Wheeler Indiana, but progressively moved to Gary Indiana, Philadelphia Pennsylvania, and then Wilmington Delaware. Sue graduated from Haverford High School in 1951. She went on to graduate from Pennsylvania State University in 1955 and was a proud member of the Kappa Alpha Theta sorority. In 1957, she joined Dean Richard Wotring in a marriage that would last 14 years. Sue had a love for both learning and teaching. She later earned her master’s degree in Education while she was teaching in Florida. Sue was an inspirational teacher for both American Airlines and the Sarasota County School System in Florida. She retired to teach life skills in Jamaica for the Peace Corps and later worked with Burmese refugees for international outreach organizations in Thailand. An exuberant Democrat, she sometimes volunteered for the Democratic Party and enjoyed both political and spiritual discussion. Sue is survived by her son, Richard Strom Wotring and daughter-in-law DeeAnn Curry Wotring of Summerfield, NC; her daughter, Margaret Wotring Plumley and son-in-law Jeffrey Scott Plumley of Sterling, VA; her son, Blake Roy Wotring and daughter-in-law Mary Louise Butchkovitz Wotring of Brooklyn, NY; her grandchildren, Meredith Megan Wotring of Greensboro, NC, Wesley Wade Wotring of Summerfield, NC, Roy Blake Wotring (and wife Alexandra Grace Mistovich), Alexander Barnes Wotring (and wife Kyle Ann Pietruszewski Wotring), James Timo Wotring of Pittsburgh, PA, Anna Elisabeth Wotring of Brooklyn, NY; her great grandson, Brooks Alexander Wotring of Pittsburgh, PA; her brother-in-law, Daniel Mac Carmichael, Jr. of Chapel Hill, NC; her sister, Starr Messick Rohrman of Santa Rosa, CA. Sue is predeceased by her sister, Mary Alyce Strom Carmichael of Chapel Hill, NC. Sue was diagnosed with COVID-19 on January 11th and her death on March 28th was a result of complications from that disease. Sue attended Morehead United Methodist Church in Greensboro, NC. Her funeral services will be held at 10 AM on Saturday, April 3, 2021 in the funeral home chapel of Forbis and Dick Guilford Chapel, 5926 W. Friendly Avenue, Greensboro, NC 27410. Online condolences may be offered at www.forbisanddick.com

GREENSBORO - Suzanne Strom Wotring passed peacefully during hospice care on the afternoon of March 28, 2021. She was born to her parents, Oscar Strom and Florence Barnes Strom, in Chicago, IL on July 13,1933. Known to most as Sue, she began... View Obituary & Service Information

The family of Suzanne Strom Wotring created this Life Tributes page to make it easy to share your memories.

Send flowers to the Wotring family.