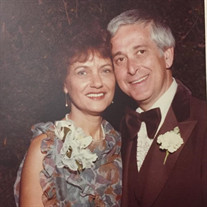 Sue B. Lerner, age 95, died on Saturday August 28, 2021, at Beacon Place Greensboro, NC. Sue was born on August 5, 1926, in Cleveland, Ohio to Malvene (Sands) and Leonard Bialosky. Sue graduated from Flora Stone Mather College, Cleveland, OH. On February 22, 1948, Sue married Jack Lerner. In 1952, the family and their two sons moved to Indiana PA. In 1965 Sue and Jack (of blessed memory) and their two sons and two daughters moved to New Jersey. In 1988 Jack retired as Vice President of the Campus Outerwear Division. Sue continued working as a referral counselor for the Health and Welfare Counsel in Hackensack, NJ. In 1994 Sue and Jack had the good sense to move from NJ to Greensboro. Thank you, Betty Roth (Greensboro). Sue was the younger sister of Joan Silberbach. Through their lives Sue and Joan were best of friends. Well into their 80’s Sue and Joan would make a yearly sojourn to Hanging Rock for a week of camping, swimming, canoeing, scrabble playing, late night s’mores. The sisters looked forward to these camping trip every year. Sue is survived by son Stanley Robert Lerner (Elyse) and daughter, Elizabeth Ann (Betsy) Lerner. Sue is also survived by grandchildren David, Alexandra (Christian), Maxwell (Ashley), Hannah, Christopher, and Wyatt. Sue is survived by great grandchildren Noah, Emmerson Lace, and Jax. Sue’s son, John David Lerner and daughter, Leslie Joan McKeeby predeceased Sue. All of Sue’s family and friends had the good fortune of sharing companionship and love with Sue. She will be missed. Services at the Hebrew Cemetery on September 1, 2021, at 10:00AM. In lieu of flowers, the family is requesting donations be made in Sue’s memory to the Hamil Kerr Foundation, a non-profit organization that provides financial assistance to those individuals in the Triad with Parkinson’s Disease so they can utilize various Parkinson’s resources. Send checks to: HKC Foundation for Parkinson’s PO Box 1963 Jamestown, NC 27282

The family of Sue B. Lerner created this Life Tributes page to make it easy to share your memories.

Send flowers to the Lerner family.