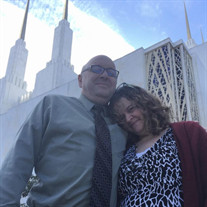 Steven Oliver Brown, 52, of Greensboro passed away on March 20, 2022 during a hospitalization. He was born July 20, 1969 in Canada to Phillip Skelton and Valerie Kay Hammer, and later adopted after a second marriage to John “Jack” Alton Brown. He spent his youth in Cave Junction Oregon and graduated salutatorian from Illinois Valley High in 1987. Rather than pursue scholarships, Steve opted to serve two years in the Army Airborne Division at Fort Bragg, NC, where he met his future wife, Nalani at a church dance in Colfax, NC. Afterwards he served a two year mission for the Church of Jesus Christ of Latter-Day Saints in Sao Paulo, Brazil from 1989-1991. Following his mission, Steve moved to Chapel Hill, NC and married in 1992. He attended NC State University and Graduated with a BS in Chemical engineering. His professional life took him and his family to Rhode Island, Tennessee, New York, Indiana, and finally back to his wife’s hometown of Greensboro, NC. Steve was currently employed as a process management engineer at Vertellus Specialties, Inc. He also volunteered consistently at his church, and was currently teaching a class of 6 and 7 year olds on Sundays. Teaching children about God through lessons and songs were his favorite callings. Steve also sang in his church choir, where his beautiful voice and keen ear will be sorely missed. He regularly performed with friends and family and loved to do so. In his spare-time he enjoyed fishing, and regularly took family and friends with him, feeding hordes with his delicious catfish and Puff (the magic) Chicken. At heart Steve loved to make people happy with his legendary grilling and cooking and could often be found delivering tastes to neighbors and friends. Gregarious to the core, his family often said that he could strike up a conversation with a brick wall and it would answer back. Steve also was an active agent in the world of electronic music, having spearheaded the creation of the Afterhours Show when he attended NC State. This show continued to have yearly reunion broadcasts around Christmas from the NC State student radio 88.1. Steve also had a monthly radio show on EC Underground, which broadcasts worldwide and featured interviews with electronic artists from far flung places like Northern Ireland and Czechoslovakia. He held his final broadcast from his hospital bed the day before he died and had a great time doing it. Their tribute to him can be found at (20+) EC Underground | Facebook . Steve is survived by his wife Nalani Bulla Brown and his children Connor Matthew Brown, Savannah Corinne Brown, Zoe Hannah Brown, Ellie Faith Brown and April Grace Brown. He also leaves his mother, Valerie Kay Lathen and sisters Anne Britt, Nora Catherine Brown, Miriam Mumm and Joanna Sedgwick, and many nieces and nephews and a host of friends. The viewing will be held on Friday, March 25th from 6-8 pm at Forbis and Dick Funeral home at 5926 W. Friendly Avenue in Greensboro, NC. His funeral service will be 3:00 Saturday, March 26th at The Church of Jesus Christ of Latter-Day Saints at 3719 Pinetop Rd, Greensboro. As a final salute to his broadcasting career, it will also be hosted on zoom for those far away at https://zoom.us/j/92664960830 . Steve will be cremated and his ashes will be interred at a later date at Forest Lawn Cemetery in the Guilford Battleground area of Greensboro, adjoining Jaycee Park off Pisgah Church Road. Forbis and Dick Guilford Chapel is serving the family.

Steven Oliver Brown, 52, of Greensboro passed away on March 20, 2022 during a hospitalization. He was born July 20, 1969 in Canada to Phillip Skelton and Valerie Kay Hammer, and later adopted after a second marriage to John &#8220;Jack&#8221;... View Obituary & Service Information

The family of Steven Oliver Brown created this Life Tributes page to make it easy to share your memories.

Send flowers to the Brown family.