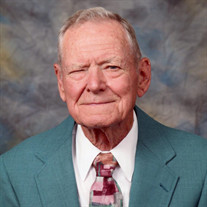 MOCKSVILLE – Mr. Stacy Asbury Beck, of Wagner Road, finished his race on this earth Saturday, August 14, 2021 at his home, following 92 years of sheer determination and a battle with terminal delirium Alzheimer’s disease. His soul was ready and willing to meet his Heavenly Father face-to-face, along with the many who went before him, but his body did as it always had—it would not back down. He was born on January 19, 1929, in Davie County, the eldest child of the late Walter Taft Beck and Gurtha Myrtle Draughn Beck. He loved basketball and baseball in school and was an outstanding player. He kept a bat in his hands with work and church teams well into his 50s, when his sight put a halt to his career. Mr. Beck was always concerned about his family, wanting to know where everyone was, what they did that day, and that each was accounted for. His love of physical labor and the outdoors would have kept him in the woods with his uncle Paul Jones, but his severe reaction to poison oak sent him inside to spend 42 years finishing furniture as the Mocksville plant went from Drexel, Heritage, Drexel-Heritage, Champion, and finally, Lexington Home Brands. He worked himself up from pushing a broom to being the plant superintendent. When he wasn’t at work or tending to his property, he was at Bear Creek Baptist Church, serving as a Sunday School teacher, deacon, or serving in other capacities. His love of sports caused him to encourage men through the church softball league. He touched a lot of lives in ways he didn’t even realize and will be remembered with love and gratitude. In addition to his parents, he was preceded in death his wife, Mary Frances “Pan” Atkinson Beck; a daughter, Elizabeth Ann; a great-grandchild, Willow Beck; and grandparents, William Asbury and Lula Bowles Beck, and John Clark and Martha Simpson Draughn. Survivors include three children, Patti Newsom (Curt) of Hamptonville, Susan Carter (Rick) of Mocksville, and Andy Beck of Mocksville; three grandchildren, Andrew Beck (Hannah), Ashleigh Byrd, and Cameron Beck; great-grandchildren, Makyiah Byrd, Colton Beck, and Lincoln Beck; and sisters, Dorothy Cranfill and Peggy Whittaker. A graveside service will be conducted at 11 a.m., Thursday, August 19, in Bear Creek Baptist Church Cemetery with Rev. Greg McEwen officiating. The public may pay respects to Mr. Beck from 8:30 a.m. to 5 p.m. Wednesday by visiting Eaton Funeral Home. The family would like to extend a special thanks to Christie Rucker, Celena Kelly, LaVerne Ijames, Sharon Hallman, Dwayne Smith and his team, and Well Care Hospice for keeping Mr. Beck between the lines. In lieu of flowers, memorials may be considered for William R. Davie Volunteer Fire Department, P.O. Box 934, Mocksville, NC 27028; Well Care Hospice through https://www.ahhcnc.org/foundation; Bear Creek Baptist Church, 492 Bear Creek Church Road, Mocksville, NC 27028; or a charity of the donor’s choice.

The family of Stacy Asbury Beck created this Life Tributes page to make it easy to share your memories.

Send flowers to the Beck family.