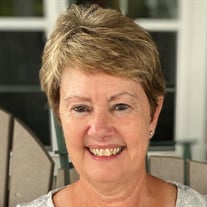 Our beloved “Sassy”, Sandra Ann Chapman was called home to be with Jesus on Monday, June 20, 2022 after a hard fought battle with ovarian cancer. Sandy was born to Rex and Hilda Kiser on August 8, 1959 in Greensboro, North Carolina where she grew up. She married her loving husband Ed Chapman on February 10, 1991 and they had a wonderful 31 year marriage. In 2016, Sandy & her husband Ed moved to Burlington to be close to her daughter Morgan, and grandchildren Miles and Colby, who she loved dearly. Her boys named her “Sassy” which fit her feisty personality perfectly and she was the absolute BEST grandma to them. The seven years she spent being a grandma were the highlight of her life and she was always taking the boys on some kind of adventure and keeping them busy outside. She had endless energy and it was hard to keep up with her even when she was getting chemo for 17 straight months. To say she was a fighter would be an understatement. She was an absolute warrior and never gave up and never lost hope. She defeated death and now lives in her eternal home where I know she is healed and watching over us all. She had such a radiant personality and people were drawn to her. She was also an avid tennis player and played all the way up until the last couple of months which was incredible! She leaves behind hundreds of friends who were like family and losing her will leave a hole in all of our hearts. One of the special and unique bonds she had was with her ex-husband Keith Miller and his wife Julie Miller. No one could believe our family dynamic and that all of them got along so well and were best friends. Ed & Sandy, Keith & Julie showed a true example of what family should be and did it all for their daughter Morgan (and because they really all loved each other). It was truly a special thing that not many kids from divorce are lucky enough to have. What a shining example of redemption and selflessness on all parts. She was our glue but we will all still be family forever. Sandy was preceded in death by her father Rex. She is survived by her mother Hilda, husband Ed, her daughter Morgan Danford (Ryan), her grandchildren Miles and Colby and her step-daughter Kathy Chapman. The Family will receive friends in visitation from 12:30-1:45 pm on Thursday 06/23,,2022 at Forbis and Dick North Elm Street. A funeral service will follow at 2:00 pm in the North Elm Chapel. Interment will be private for Family only. Isaiah 41:13 “For I am the Lord your God, who takes hold of your right hand and says to you, do not fear; I will help you.” “Death is not the end of life, it is only the gateway to eternity.” - Billy Graham In lieu of flowers, donations can be made to She-Rocks.org for ovarian cancer research and awareness.

Our beloved &#8220;Sassy&#8221;, Sandra Ann Chapman was called home to be with Jesus on Monday, June 20, 2022 after a hard fought battle with ovarian cancer. Sandy was born to Rex and Hilda Kiser on August 8, 1959 in Greensboro, North Carolina... View Obituary & Service Information

The family of Sandra Ann Kiser Chapman created this Life Tributes page to make it easy to share your memories.

Our beloved “Sassy”, Sandra Ann Chapman was called home to be...

Send flowers to the Chapman family.