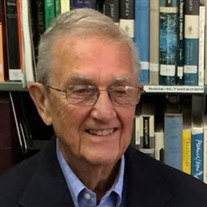 On Wednesday, April 7, Samuel Ashby Turner of Greensboro, father of four, passed away at the age of 91. Sam was born in Columbia, SC on November 20, 1929—the son of Grace Killingsworth Turner of Abbeville, SC and J. Ashby Turner of Greenwood, SC. He attended the University of South Carolina where he majored in management, graduating in the class of 1952. He was a member of Sigma Nu fraternity and an avid lifetime Gamecock fan. Sam married Flossye Turner of Greer, SC, who predeceased him in January, 2020. He started his career in sales with American Hospital Supply and then spent the bulk of his time with Oakite Products. Upon retirement, he joined the family printing business, Sun & Wind. He was gracious during his life with his time and energy. In the early years, he was the youngest member of the Board of Stewards at Washington Street Methodist Church in Columbia, SC. as well as a member of the Jaycees. In Greensboro, he was a longtime member of the Civitan Club where he served in many roles including President, the Young Men's Bible Class at First Presbyterian Church, an Assistant Scoutmaster with Boy Scout Troop 230, a Scout Master Chaperon to Philmont, NM, and volunteered regionally in the General Greene Scout Council. He was a volunteer tutor at Cone Elementary and supported the Youth Vote campaign. Sam was a family man and proud of his children. He never met a stranger, and he was never shy with words. He was always up for fun and adventure with his kids. He took them on bike rides to get ice cream, created play spaces in the yard, and played in the pool at Sherwood. He encouraged his children to learn and travel the world. His passions included Dixieland jazz, coin collecting, working in the yard, and attending Page High School football for decades after his children graduated. He faithfully attended with his buddies Bob Clendenin and Bob Shearin. He supported his wife of 59 years in her parenting, business, gardening, and outdoor adventures. He is survived by his children; Terrill and Bill Hardaway of Charlotte, NC; Kay Turner of Washington, DC; Sam and Traci Turner of Greensboro; and Jim and Jennifer Turner of Denver, CO. He was blessed to have 7 grandchildren including Eliza and Pepper Hardaway; Evelyn Turner; Josh and Alex Turner; and Grace and Blair Turner. The family will hold a private joint inurnment where he will be placed with his beloved wife on Saturday, April 17 at First Presbyterian Church of Greensboro. A celebration of life will take place later in the year. In lieu of flowers, donations can be made in care of Sam Turner to the Young Men's Bible Class of First Presbyterian Church of Greensboro.

The family of Samuel Ashby Turner created this Life Tributes page to make it easy to share your memories.

Send flowers to the Turner family.