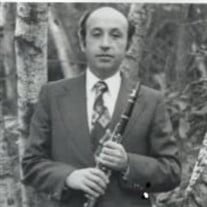 Samuel Costello passed away on Thursday, March 10, 2022, in Greensboro. Samuel was born in Buffalo, New York, on January 13, 1939, to the late Samuel Costello and Ida Barone Costello. There will be a funeral service at 2:00 PM, Friday, March 18, 2022, at Lee’s Chapel United Methodist Church, 2303 Lee’s Chapel Road, Greensboro, NC 27405. There will be a private committal for the family. Born in Buffalo, New York, Samuel Costello grew up blocks from the mighty Niagara River. He began playing clarinet when he was nine years old. In high school, he successfully auditioned for the University of Buffalo music program, where he received his degree in Music and studied clarinet with Alan Sigel of the Buffalo Philharmonic. He became principal clarinetist with the Buffalo Little Symphony and with the Buffalo Opera Workshop. He held a Master of Music degree from the Manhattan School of Music, where he studied with Leon Russianoff, and was clarinetist with the Manhattan Orchestra. He also studied with Peter Simenauer of the New York Philharmonic. For several seasons, Sam performed as clarinetist with the Florida Symphony Orchestra under the direction of Henry Mazer. He also played with the National Orchestral Association in New York and appeared frequently in the New York metropolitan area with many other ensembles, including the Janus Trio. In addition to his musical achievements, Sam was a systems designer for several major corporations. He earned his MBA in Finance at Fairleigh Dickinson University. One of his most gratifying accomplishments in this field was his work in computerizing AT&T’s 1-800 toll-free system. Later, Sam pursued his literary inclinations, authoring several published short stories and his memoir, Driving in Traffic, Then and Now. An avid Oxfordian, Sam was an enthusiast of all things Shakespeare. He also worked as a publicist for many musical organizations, such as the Goldman Band and the Ridgewood Concert Band. Sam met June, his future wife, at age seventeen in music theory class at the University of Buffalo. Together they raised three children, Andrew, Laura and Daniel. Sam was a devoted husband and father. He was known for his dry wit and ready smile. Sam and June enjoyed cultural activities of all kinds. They traveled extensively throughout Europe and North America. They attended countless theatre and classical music performances. Sam and June were married for sixty years, remaining devoted to music and each other. He is predeceased by his parents, sister-in-law June Costello and brothers-in-law Terence Coyle and the Rev. Horace Stoddard. He is survived by his beloved wife, June; his children, Andrew (Pamela), Laura Egerton (Ken) and Daniel (Weronika); his brother, Joseph and sister, Anne Costello-Coyle. Samuel is also survived by his grandchildren, Leah and Izadora; sister-in-law Ruth Stoddard and two nephews, five nieces, numerous great nieces and nephews and a large circle of extended family and special friends. In lieu of flowers, the family requests that you consider donating in Samuel R. Costello’s memory to the Michael J. Fox Foundation for Parkinson’s Disease at michaeljfox.org or to Lee’s Chapel UMC, 2303 Lee’s Chapel Rd., Greensboro, NC 27405. Forbis & Dick North Elm Street is assisting the Costello Family.

Samuel Costello passed away on Thursday, March 10, 2022, in Greensboro. Samuel was born in Buffalo, New York, on January 13, 1939, to the late Samuel Costello and Ida Barone Costello. There will be a funeral service at 2:00 PM, Friday, March... View Obituary & Service Information

The family of Samuel Costello created this Life Tributes page to make it easy to share your memories.

Send flowers to the Costello family.