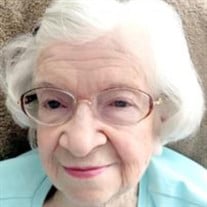 Ruth Scott Lee Smith was born on August 12, 1928 to Grady Scott Lee and Maye Newman Lee in Guilford County, NC, where she later married Aubrey Lealon Smith on 21 April 1951. She graduated from Summerfield High School, and later attended High Point College. At twelve years old, she joined Gethsemane United Methodist Church, near the tobacco farm where she grew up. Ruth later became an active member of Centenary United Methodist Church in Greensboro, and was president of the Kirkpatrick Sunday School Class, and served as a devoted member on the Council of Methodist Women. She also worked as a judge for the electoral precinct polling in Greensboro, and enjoyed her volunteer work with "Wheels for Senior Citizens." Ms. Smith was indeed a people person, and enjoyed cooking, and having people over to eat her delicious food, often serving numerous mouths. She also enjoyed various applications of needle point and cross stitch. After leaving her home on Wilshire Drive in Greensboro, she retired with her husband Aubrey at the Presbyterian Home in High Point, and later transitioned to the River Landing retirement community in Colfax, NC, where she was adored by many, and a popular member of "The River Landing Band." She was one of the last surviving members of "The Rushettes of Greensboro," a woman's service club, which was organized in 1948. This group of 20 best friends not only had fun together, they contributed their time and money to such causes as polio, cerebral palsy, and other community charities. Ms. Smith had no siblings, and two sons, Lealon Scott Smith, and Brent Edwards Smith, and was preceded in death by her husband Aubrey, and eldest son Scott, leaving behind Brent and her daughter-in-law, Dorothy Labell Smith, whom she loved very much. Her final wishes anticipated a peaceful trip to heaven, where she longed to again play the piano, dance, sing, and be reunited with her family and friends. Among seemingly endless admirable traits, Ruth Smith had an amazing way of putting others before herself, as she spread her love. Ms. Smith will be laid to rest at Guilford Memorial Park in Greensboro, next to her husband – Aubrey. A graveside service will be held at 2:00 PM on Thursday March 25, 2021 at Guilford Memorial Park. All COVID-19 Rules and Guidelines will apply.

The family of Ruth Lee Smith created this Life Tributes page to make it easy to share your memories.