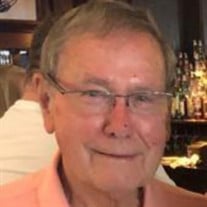 Ronald Parr, devoted husband for 59 years, father of four, grandfather of 11, passed away on May 14, 2022, at Moses Cone Hospital in Greensboro, NC. He was 82 years old. Born in Scribner, Nebraska on August 19, 1939, he was the first child of Al Parr and Betty Moser Parr. He attended Scribner-Snyder Community Schools, graduating from Scribner High School in 1957, where he was a three-sport athlete and named the “Athletic King”. Following high school, he attended Benedictine College in Atchison, Kansas, where he played on the Freshman Football Team. Ron’s quickness and speed earned him the nickname “Fleet Footed”. He graduated with a Business Degree. While in college, Ron met the love of his life, Darlene Mlnarik Parr. Soon after, they were married on November 24, 1962. After graduation, Ron volunteered to the Army and eventually left with an honorable discharge. After serving our country, he started his first job with 1st National Bank in Omaha. Soon after, he took a job with Western Electric which brought his family to Greensboro, NC. He went on to work with Western Electric/Lucent for 30+ years where he had a successful business career. Ron will be remembered as a devoted Catholic, family man, honest, caring, hard-working, and generous. He set a standard for his family that was simple and straightforward: “do the right thing”. To his last days, he was still thinking about the well-being of his family. Ron is survived by his sister, Mary Grunke and husband Roger Grunke, brother, Roger Parr and wife Marlene Parr, wife, Darlene Parr, and sons, Steve Parr and wife Kim Parr, Kevin Parr and wife Lisa Parr, Pat Parr, and wife Kelly Parr, Chris Parr and Rhonda Roth. Grandchildren, Tyler Parr, Megan Parr, Ryan Parr, Colin Parr, Cory Parr, Lauren Parr, Clay Parr, Mallory Parr, Ellis Parr, Logan Parr, and the gem of them all >>> Eben “EB” Parr. The family will receive guests on Thursday, May 19th from 5:00pm – 7:00pm at Forbis and Dick, 5926 W. Friendly Ave. Greensboro, NC. The funeral will start with a Mass on Friday, May 20th at 1:30 pm at St. Pius Catholic Church at 2210 North Elm St., Greensboro, NC, with the burial to follow at Westminster Gardens, 3601 Whitehurst Rd. Greensboro, NC. In lieu of flowers, memorials may be made to Benedictine College at the Office of Advancement, 1020 North Second St., Atchison, KS 66002-1499. Forbis and Dick Guilford Chapel is serving the family and online condolences may be offered at www.forbisanddick.com.

Ronald Parr, devoted husband for 59 years, father of four, grandfather of 11, passed away on May 14, 2022, at Moses Cone Hospital in Greensboro, NC. He was 82 years old. Born in Scribner, Nebraska on August 19, 1939, he was the first child... View Obituary & Service Information

The family of Ronald (Ron) Parr created this Life Tributes page to make it easy to share your memories.

Send flowers to the Parr family.