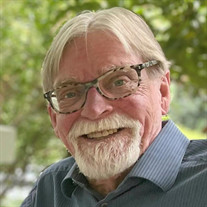 Roderick Mark Buie, III (Mark),72, died peacefully, Sunday, February 27, 2022 surrounded by friends and family singing songs he’d either written or loved. Born in Dallas, Texas in 1949, he was the son of Roderick Mark Buie, Jr., a Greensboro physician for 40 years, and Betty Jane Cannon Buie who preceded him in death. He grew up in Greensboro and graduated from Grimsley High School where he was voted Most Popular by his peers, not his teachers. Mark lived life to the hilt. He never married. Until his last breath he was always unapologetically who he was, and his friends and family loved him for his quick wit, generosity, his wide-open mind, empathy, spirit of adventure, resilience and songbird heart. After attending Wofford College where he majored in English, he taught elementary school in the NC mountains, picked apples in Vermont, painted houses in Nantucket, wrote songs and played guitar in bars (his dog Spot passed the hat for tips) and roamed the Americas until he joined the Peace Corps and was sent to Tibet. He missed his girlfriend so badly that he left the Peace Corps and came home. He was a gypsy and a troubadour at heart, but after working for the CDC in Washington, DC he returned to school in his thirties and graduated from LSU and Tulane University with degrees in nursing and public health. He joined the Peace Corps for a second time, serving two years in Honduras. When he returned, he settled in New Orleans and worked at Tulane Hospital and Charity Hospital as an ICU nurse and later as a Home Health Care nurse before he “sold his soul to the corporate devils,” as he often said, and went into research, monitoring pharmaceutical trials all over the United States and Africa. He retired in 2012 and lived in Wilmington, NC until he moved to Greensboro in 2018. He was devoted to his family and his friends, with whom he spent hours on the phone or in person daily. He liked to say that he’d always had more luck than money and that was the better of the two. He’d grown up in a happy family with loving parents who he admired and trusted. He loved music of all kinds and attended Jazz Fest every year that he lived in New Orleans. He adored his dogs, Spot and Frosty, who preceded him in death. He bought a condo in the Flatiron Building in downtown Greensboro and said it was the best place he’d ever lived. He liked sitting on the porch, smoking his cigars and talking to passersby on the sidewalk, making friends with everyone. Once heard, you could never forget his booming laugh. Even nearing the end of his life, he was making his nurses and caregivers laugh. He is survived by his sister, Marianne Buie Gingher of Greensboro, his brothers David Buie (wife Mary Edna) of Charlotte and John Buie (partner Joanne Christopher) of Little River, SC; nephews Roderick Gingher of Charlotte, Sam Gingher (wife Nayoung Kim) of Flagstaff, AZ, Will Buie (wife Liz ) and niece Mary Buie Schuller (husband John) of Charlotte; and great-nephews Yunoo and Eunoo Gingher (Flagstaff), Jack Schuller and Wade Buie (Charlotte) and great-nieces Lila Jane Buie and Katherine and Evelyn Schuller (Charlotte). The family wishes to thank caregivers Esther Hughes and Angie Riggans Baker for their loving support. Memorial gifts may be made to the Humane Society of Greensboro, Urban Ministries of Greensboro, and Fruit of the Spirit Ministries in Greensboro. A Celebration of Mark’s life in stories and song will take place in June. Forbis and Dick North Elm Street is assisting the Buie Family.

The family of Roderick Mark Buie III created this Life Tributes page to make it easy to share your memories.

Send flowers to the Buie family.