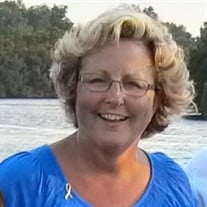 Robin K. Wells passed away Monday, December 6, 2021, surrounded by family. Robin was born in Greensboro, NC where she met her soulmate, Danny Wells. Together they raised three children, and eventually they were blessed with five grandchildren, who she adored. Robin worked in the histology department at Wesley Long Community Hospital until they were bought out in 1997. She finished her career at Greensboro Pathology, now Aurora Diagnostic. Robin was known for her “bigger than life” personality and her caring nature. Her ability to brighten anyone’s day was nothing less than amazing. It would be an understatement to say she was simply supportive. Robin would always go above and beyond to support others, especially her family and friends. She worked hard to instill these traits in her children and push them to do their best. She proudly supported each child in their endeavors, which would earn her the affectionate nickname of “Momma Wells”. When diagnosed with breast cancer in 2000, she was determined to fight and win the battle. She became a 21-year survivor and continued to support the efforts to find a cure. Robin is survived by her husband of 48 years, Danny Wells; children, Daniel Wells (Oksana Wells), Keri Wells, and Teri Wells; grandchildren, Nickolas Wells, Natalya Wells, Naomi Wells, Niles Wells and Griffin Faye Giles; siblings, Barry Kivette (Paula Kivette), Kandy Apple (Ricky Apple). Predeceased in death by Faye C. Tadlock. Arrangements will be held on Saturday, December 11, 2021 at Reedy Fork Community Church. Visitation begins at 11:00 am, the funeral service at 12:00pm. Followed by a grave side service at Lakeview Memorial Cemetery at 1:00pm In Lieu of flower please donate to Susan G. Komen https://www.komen.org/

Robin K. Wells passed away Monday, December 6, 2021, surrounded by family. Robin was born in Greensboro, NC where she met her soulmate, Danny Wells. Together they raised three children, and eventually they were blessed with five grandchildren,... View Obituary & Service Information

The family of Robin K Wells created this Life Tributes page to make it easy to share your memories.

Send flowers to the Wells family.