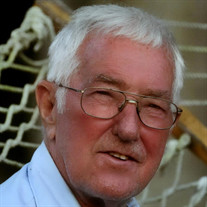 Robert Monroe Southard, 91, passed away on Saturday, September 25, 2021 at his home with family by his side. A graveside service will be held at 3 p.m. on Thursday, September 30 at Summerfield Peace United Methodist Church Cemetery. Covid protocols will be observed. Friends are invited to pay their respects between 1 and 7 p.m. on Wednesday afternoon at Forbis & Dick – Stokesdale. The family will not be present. A Guilford County native, Bob was born on November 27, 1929 the son of the late William Monroe Southard and Ruby Thomas Southard. Bob served faithfully and honorably in the US Army during the Korean Conflict and retired from the Sears distribution center. He was also a long-time member of Summerfield Peace United Methodist Church, serving where needed, most notably as chief usher for many years and operating the sound system. Nothing was more important to Bob than family and community. He was instrumental in the development and growth of the Summerfield Fire Department and served as Assistant Chief for over 25 years. On slow afternoons he could be found at the Summerfield Feed Mill keeping up with local issues, fishing, or tending his garden. His iris garden was admired by all who passed by. In addition to his parents, he was preceded in death by his wife, Catherine Mabe Southard in January of this year, and brothers Richard Southard and Donnie ‘Short Man’ Southard. Surviving are daughters Tina Page and her husband, Mike and Robin Perkins and her husband, Ned all of Summerfield; 5 grandchildren Michael Page (Carrie), Ashley Lunsford (Jamey), Katherine Sanders (Chris), Christine Storie (Matt), and Robbie Perkins; great grandchildren Colbey Lunsford, Gracey Lunsford, Camdyn Page and Fisher Page; sisters Avahlee Pearson of Greensboro and Jeannie Mae Clark of Stokesdale. The family extends special thanks and appreciation to his in-home caregivers, Penny Hairston, Caroline Dalton, and Mary Pruitt. Memorial donations may be made to Summerfield Peace United Methodist Church, PO Box 639, Summerfield, NC 27358.

Robert Monroe Southard, 91, passed away on Saturday, September 25, 2021 at his home with family by his side. A graveside service will be held at 3 p.m. on Thursday, September 30 at Summerfield Peace United Methodist Church Cemetery. Covid protocols... View Obituary & Service Information

The family of Robert Monroe Southard created this Life Tributes page to make it easy to share your memories.

Send flowers to the Southard family.