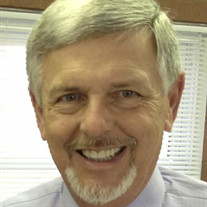 Robert Allen, a man who lived life fully and without regret, died June 5th in the arms of his loving wife, Donna. Robert was a wonderful husband and father, a devoted son, a good brother, a fun-loving uncle, a trusted nephew, cousin, and confidante as well as a wise friend who could be counted on. He dearly loved his family and became an expert on its history. When his 85-year-old Mother needed a partner for her bowling league, Robert joined too and drove her to Greensboro each week stopping to get her favorite breakfast biscuit on the way. After a stroke at 94 that left her bedridden, he continued to care for her with devotion and tenderness. He was a concerned father who continually looked out for what was best for his sons. He was “PopPop” to his grandchildren, and his smiles were biggest when they were around. He enjoyed visiting them to engage in the occasional nerf war or to treat them to a ride in his little blue sports car. Robert loved his wife Donna with all his heart. Although they were married for almost 20 years it seemed as if they had always known each other. They cared for each other well, and the family is grateful for all of the time and memories they were able to make and share. Robert worked tirelessly at every job he was given, whether it was planting shrubs, helping a neighbor, or working 30 years at Honeywell. As a result, he enjoyed a comfortable retirement. He truly made the most of his time and valued every minute he was given. Each of us is a better person because of his love and influence on our lives. Robert freely shared his faith in God with others and often shared a theological message with members of his little country church. While we grieve, we do not grieve as those without hope. Robert knew Jesus, and we will meet again. Robert is survived by his wife Donna, brother Richard and wife Cynthia, son Chris and wife Amy, son Cory and wife Cathy, and four grandchildren Hannah, Grace, Michael, and Daniel. A memorial service will be held at 2:00 on Saturday, June 12, 2021 at: Bethel United Methodist Church, 3809 New Salem Road, Climax, NC 27233 A time for fellowship will follow at the church.

Robert Allen, a man who lived life fully and without regret, died June 5th in the arms of his loving wife, Donna. Robert was a wonderful husband and father, a devoted son, a good brother, a fun-loving uncle, a trusted nephew, cousin, and confidante... View Obituary & Service Information

The family of Robert Lewis Allen created this Life Tributes page to make it easy to share your memories.

Robert Allen, a man who lived life fully and without regret,...

Send flowers to the Allen family.