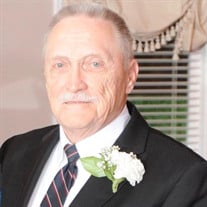 On November 9, 2021, Robert William Adams, Sr. passed peacefully from this world at the age of 89 into the next where he is with our LORD Jesus Christ (John 11:25-26). He was a loving husband, devoted father of five, grandfather to seven, great-grandfather to five and friend to many. He was born on May 14, 1932 in Lebanon, Missouri to Earl and Velma (née “Harris”) Adams, their only child. He was raised in Springfield, MO and attended Drury University. He married his love, Charlotte Tynes, on Valentine’s Day 1954. He served in the U.S. Army during the Korean War as a demolitions expert and was stationed in Germany. After fulfilling his military duty, he returned to Springfield and his wife and first-born child. He was employed by Bell South and eventually by AT&T for many years, moving his family from Springfield, MO to Kansas City, MO to Colorado Springs, CO and finally to Freehold Township, NJ. He retired to Greensboro, NC in 1986 and remained there. Robert was a sports enthusiast. He was an excellent basketball player during high school, college and while enlisted in the Army. He coached his two sons’ (Jesse and Robert, Jr.) Little League Baseball games. He played golf, his favorite sport, as much as possible before and after retiring. He always looked forward to his annual golf trip with his youngest son, Robert, Jr. and his son-in-law, Paul. He is preceded in death by his sons, Jesse Adams of Greensboro, NC and Robert Adams, Jr. of Whitsett, NC. He is survived by his wife, Charlotte Caroline (née “Tynes”) Adams, of Greensboro; his daughters, Rene’ Santagata (Frank) of Hopatcong, NJ, Randy Brantley (Gary) of Freehold, NJ, and Rise’ Vidovich (Paul) of Greensboro, NC, daughter-in-law, Diana Adams, and several grandchildren and great-grandchildren. A Celebration of Life Service will be held at Forbis and Dick Funeral Home, 1118 North Elm Street, Greensboro, NC on Saturday, November 13, 2021 at 11:00 a.m. and will immediately be followed by internment at Forest Lawn Cemetery, 3901 Forest Lawn Drive in Greensboro. Charitable contributions can be made to Tunnels to Towers Foundation, 2631 Hylan Boulevard, Staten island, NY 10306.

On November 9, 2021, Robert William Adams, Sr. passed peacefully from this world at the age of 89 into the next where he is with our LORD Jesus Christ (John 11:25-26). He was a loving husband, devoted father of five, grandfather to seven, great-grandfather... View Obituary & Service Information

The family of Robert William Adams Sr. created this Life Tributes page to make it easy to share your memories.

Send flowers to the Adams family.