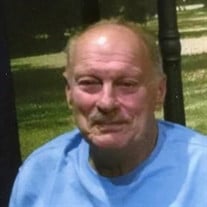 Richard Daniel Scarponi, beloved husband and father, passed away on November 30, 2021. A memorial service will be held at 2:00 p.m. on Sunday, December 5, 2021 at Forbis and Dick Guilford Chapel, 5926 W. Friendly Avenue, Greensboro, NC 27410. The family will receive visitation from friends following the service. Rich was born on November 14, 1947, in Somerville, New Jersey to the late Daniel Richard Scarponi and Margaret Velcheck Scarponi. He joined the Air Force and served in the Vietnam war. In 1967, Rich began his working career as a mail carrier at Costa Mesa, California where he worked for 6 months before transferring to the post office at Somerville, New Jersey. After getting married and adopting two children from Seoul, Korea, he then transferred to Greensboro, NC where continued his career in the post office until he retired, in 2001. He was a member of IHM, was a 3rd Degree in the Knights of Columbus, and was a member of NARFE. He was also a volunteer with the Somerville Rescue Squad and the Red Cross of Greensboro. Rich married the love of his life, Arlene Snyder, and the two enjoyed 45 years of marriage together. He was a loving husband and devoted father to two adopted, Korean children. He was always very involved in the lives of his two children and was quite active in their sporting events. He loved football, Sprint Car racing and NASCAR. He loved to fish particularly when he and his son went “cat fishing” at night. Those left to cherish his memory include his loving wife, Arlene Snyder Scarponi, his children, Rebecca Scarponi, (Friend Larry Travis), and son, Douglas Scarponi and wife Shannon, a brother, David Scarponi of San Clemente, California, his wife, Maryanne and nephews, Anthony and DJ and wife, Lauren all of California. He also leaves behind his beloved four-legged best friend, Roxy. For those wishing to make a charitable donation in Richard’s memory, the family suggests a gift to the Mental Health Associates of the Triad, 910 Mill Avenue, High Point, NC 27260. Forbis and Dick Guilford Chapel is serving the family and online condolences may be offered at www.forbisanddick.com

The family of Richard Daniel Scarponi created this Life Tributes page to make it easy to share your memories.

Send flowers to the Scarponi family.