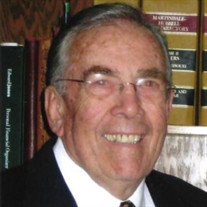 Richard Marvin Royal, 86, of Greensboro, died September 27, 2021. “Dick”, as he was affectionately known, was born February 11th, 1935, to James Marvin Royal and Georgia Smith Royal. He grew up in Greensboro and was a proud 1953 graduate of Greensboro Senior High School. He attended Guilford College and started his career at Jefferson-Pilot Fire & Casualty Company in 1965 as a casualty underwriter. He was a dedicated and valued member of that organization, and at the time of his retirement in 1994, he was Vice President of Personal Lines Underwriting. He attended Alamance Presbyterian Church and served as a Deacon and an Elder. He was an active member of the Alamance Community Lions Club and served as President, Director and Secretary as well as Deputy District Governor. Dick is survived by his loving and devoted wife of 61 years, Patsy Ray Royal; son Rick Royal (Kathleen) of Florida; daughter Paige Wagner (Lee) of Hickory; daughter Wendy Jones (Ralph) of Greensboro; grandchildren Carson Royal, Keely Wagner, Dalton Wagner, Yates Wagner, Davis Jones, Max Jones and Kate Jones; brother Bill Royal of Greensboro; sister Carol Cheek of Raleigh. A perfect Saturday for Dick would include washing his car, mowing the lawn and working in his garden. He had a talent for growing beautiful vegetables and his wife Pat was the canner of those vegetables. They made a great team! He had a strong work ethic and enjoyed the simple things in life. He loved baseball, all things from the 1950’s (including his 1957 Chevrolet) and music. But most of all, he loved his family fiercely and was so proud of them. A Celebration of Life will be held on Saturday, October 9th at 11am at Alamance Presbyterian Church. In lieu of flowers, memorial donations may be made to AuthoraCare Hospice; 2500 Summit Avenue; Greensboro, NC 27405. The family would like to thank the amazing caregivers who have provided loving support over the past few years. Your work has been invaluable.

The family of Richard Marvin Royal created this Life Tributes page to make it easy to share your memories.

Send flowers to the Royal family.