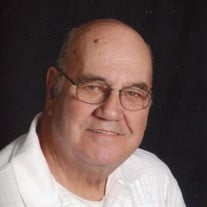 MOCKSVILLE – Mr. Richard “Wayne” Knapp, Sr. (aka Bear), 86, of Cherry Street, (formerly of Saegertown, PA), passed peacefully into the arms of his Savior on June 8, 2021. He was born June 11, 1934, in Richland Township, PA, to the late Frank Knapp and the late Aola Birdie (Chrisjohn) Knapp. He attended Cambridge Springs High School. Upon enlisting in the U.S. Army, he served 3 years in the military police during the Korean Conflict, where he was awarded Marksman and Sharpshooter status. He was honorably discharged and received the Good Conduct and National Defense Service medals. He married the love of his life, Joetta Lee Shumaker, of Saegertown, PA, on July 2, 1958. He worked for the Erie-Lackawanna Railroad and American Viscose Corporation. He subsequently worked at PPG Industries in Meadville as a millwright for 30 years until his retirement. Following his retirement, he enjoyed working for Peterson’s Auto and Hovis Auto in his spare time. He also enjoyed hunting and golfing; however, his true joy was softball. He played for many years, then decided what he really wanted was to be an umpire. He fulfilled that dream and spent 30 years as an ASA Umpire at Lincoln Avenue Softball Fields in Meadville, PA. His greatest legacy is his family and he was very proud and fiercely protective of all of them. Surviving him are his wife of nearly 63 years, Joetta; sons Richard W. Knapp, Jr. and his wife, Mary, of Mocksville; Dr. Jody L. Knapp and his wife, Amanda, of Granville, NY; his daughter Shelley L. Coleman of Meadville, PA; grandchildren Danielle, Heather, Shane, Jonathan, Mercedes, Sahara, Connor, Tiffany, Clairee, William and Aaron; 14 great-grandchildren, numerous nieces and nephews, and his dog, Bandit. In addition to his parents, he was preceded in death by his brothers Albert, Frank, Bobo and Merle; sisters Ruth and Mary; and two infant sons, Michael Wayne and Gary Steven Knapp. He was a lifetime member of New Beginnings Church of God in Meadville, PA, where many loved his singing and enjoyed his famous spaghetti and meatballs during church dinners. A celebration of life will be held Saturday, July 3, at 11:00 a.m. at New Beginnings Church of God, Meadville, PA. All are welcomed. A private interment will occur at Roselawn Memorial Gardens in Meadville, PA. Online condolences may be made at www.eatonfuneralservice.com.

The family of Richard Wayne Knapp created this Life Tributes page to make it easy to share your memories.

Send flowers to the Knapp family.