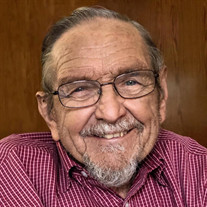 Richard “Dick” DeCoste, age 84, beloved husband, father, brother, uncle and friend, died at Wesley Long Hospital on Friday, April 23, 2021. A private, family burial service will be held at Saint Francis Episcopal Church in Greensboro, North Carolina. Dick will be remembered as one of the most laid-back people you would ever meet. He was told long ago that he would not survive to his old age. Nevertheless, he approached his life with pure optimism, never held down by the weight of being. Living as long and fully as he did was nothing short of a miracle. His family and friends were so grateful to have had his joyful soul with them for so many years. Dick was a quirky jokester who relished engaging with everyone he encountered. He was an artist who loved sharing his gifts whether they were quick sketches on napkins and styrofoam containers from restaurants; elegantly carved prayer pieces and crosses for people facing the challenges of life; or intricate Chrismons for his church. He was also deeply committed to giving back to his community through Gate City Civitan scholarships and Special Olympics. His idea of fun included concerts large and small, especially the Greensboro Symphony Pops concerts; square danciing with his wife, Becky; and taking a quiet stroll in the Bog Garden at Benjamin Park. He was devoted to his family, proudly attending his children’s and grandchildren’s activities or simply helping them create pinewood derby cars or wood block carvings in his cluttered workshop. He loved big family gatherings, trips with his four brothers and their wives, and treks near and far to visit family. Dick grew up in Basking Ridge, New Jersey, but traveled south to attend North Carolina State University, where he studied civil engineering and met his bride-to-be. He worked at several engineering firms in Asheboro and Greensboro before starting his own consulting engineering business, where he worked until his retirement. He loved being an engineer and solving tricky problems, which he remembered in detail many years later. He was preceded in death by his parents, John and Caroline DeCoste; his wife of 53 years, Becky DeCoste; and brothers John DeCoste and Bob DeCoste. He is survived by his children, Kim DeCoste (Frank Sheets), Donna DeCoste, Bonnie Thyer (Joff Thyer), and Chuck King; grandchildren, Emily St. John Mosse (Dan), Mikhala Sheets, Savannah Parada, Rebecca Parada, Jeremy Thyer and Emma Thyer; great grandson, James St. John; brothers, Jim DeCoste (Carol), Paul DeCoste (Pat); brothers-in-law & sisters-in-law, Richard and Diana Dunning, Ronald and Marilyn Dunning, Elaine DeCoste, Monica DeCoste, Jeanne Dunning and Judy Dunning; and many cousins, nieces and nephews. In lieu of flowers, contributions can be sent to the American Heart Association.

The family of Richard "Dick" DeCoste created this Life Tributes page to make it easy to share your memories.

Send flowers to the DeCoste family.