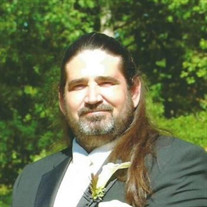 CATAWBA – Mr. Richard Jerome Coates passed away on Tuesday, January 25, 2022. Born July 27, 1965, in Michigan, Richard enjoyed spending his childhood outdoors in the woods, especially fishing. After high school, Richard proudly enlisted with the United States Marines, serving and protecting our country in Desert Storm. Following his time in service, he chose a career as a truck driver that allowed him to travel throughout and experience the country he loved. In his spare time, Richard enjoyed reading, as well as writing some manuscripts of his own. Richard is preceded in death by his father, William Coates; his birth mother, Katherine Happney; and his brother, Ricky Joe Cox. He is survived by his wife, Catherine Coates; daughter, Caitlyn Coates; stepsons, Brian Custer (Sara), Keith Custer (Lauren), Elias Christopher and Shane Custer (Debra); his grandsons, who affectionately referred to him as “Cookie Monster”, Keith, Kyle, and Christian Custer; his mother, Patricia Coates; brothers, Danny Cox, David Cox, Larry Jimison Cox, and Michael Cox; and sisters, Tammy Perdue, Loretta Owen, and Regenia Kendrick. He will be missed by so many. A funeral mass will be conducted at 11 a.m. Tuesday, February 1, at St. Francis of Assisi Catholic Church in Mocksville with Rev. Eric Kowalski officiating. Interment will follow in Rose Cemetery. The family will receive friends from 9:30 to 10:30 a.m., Tuesday at Eaton Funeral Home.

The family of Richard Jerome Coates created this Life Tributes page to make it easy to share your memories.

Send flowers to the Coates family.