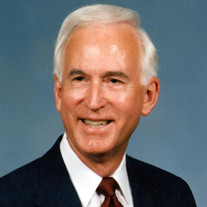 The Rev. Charles E. Page, Th.D., age 90, retired United Methodist pastor, died Tuesday, March 19, 2019 at Arbor Acres Retirement Community, Winston-Salem, NC. A 2:00 p.m. memorial service will be held at West Market Street United Methodist Church, Greensboro, NC on Sunday, March 24th. 2019 led by the Reverends Bill Ellison and Pam Strader. The family will receive friends immediately following the service in the Gathering Space at the church. A native of the Wilson County, town of Sims, NC, he was the eldest of three children born to the late Charles Ross Page and Elizabeth Davis. Following graduation at Rock Ridge High School in 1946, he entered Atlantic Christian College, and then attended Duke University. He was a graduate of Candler School of Theology at Emory University, and studied theology at the University of London and Geneva. The Pages were active participants in the Sims Methodist Church where young Charles served as a Sunday School teacher and superintendent. At the age of seventeen he committed himself to God’s call to the ordained ministry. He was ordained Deacon by Bishop Costen J. Harrell at Wesley Memorial Church, High Point NC and Elder by Bishop Harrell on October 2, 1955 at Dilworth Church, Charlotte, NC. His first full-time work in the church was Associate Pastor for Children and Youth Ministry at Central Methodist Church in Albemarle. There, he met and married the former Catherine P. Harrison a native of Petersburg, VA, and teacher at Albemarle High School. Other pastorates include Shiloh, Granite Quarry; Cold Springs, Concord; St. Paul, Greensboro; Salisbury, First Church (Associate); Stokesdale, Gibsonville; Commonwealth, Charlotte; First, Cherryville, and Mouzon, Charlotte, a total of forty-one years of service. In retirement he continued his ministry serving as Protestant Chaplain on several Holland America cruises, and volunteering at Front St. UMC in Burlington, and West Market Street UMC in Greensboro. He had an avid interest in patriotic organizations and early-on became a member of The Sons of the American Revolution (SAR). From 1997-1999 he was president of the North Carolina Society, and served the national society as Vice President General for the South Atlantic District, and as Chaplain General. He was a life member of the SAR, the Society of Colonial Wars in NC, and the North Carolina Genealogical Society. He was also a member of the National Congress of Patriotic Organizations, a Rotarian and past president of the Gibsonville Club. He was a former Trustee of the Alamance County Historical Museum and the NC Capitol Society. His wife of 59 years died June 19, 2011. Surviving are two daughters, Rebecca (husband, E.W. “Bill” Buchanan, Jr.) of Greensboro, and Susan (husband, Richard D. Kane, MD) of Raleigh. Also surviving are two grandchildren, Charles William (Chad) Buchanan (Jennifer), and Catherine Kane Kaminski (Brian) and their daughter, a great grandchild, Jaqueline and soon to be great grandson, Caleb. Additionally, he is survived by a brother, Marshall Peele Page of Wendell, and several nieces and nephews. He was preceded in death by another brother, John Daniel Page of Kenly. Online conolences may be made at www.forbisanddick.com. Memorials may be made for the Music Ministry of West Market St. United Methodist Church, 302 W. Market St., PO Box 870, Greensboro, NC 27401-2505.

The family of Reverend Charles Elbert Page created this Life Tributes page to make it easy to share your memories.

Send flowers to the Page family.