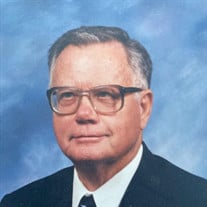 Ralph H Bowden, 92, passed away September 29, 2021. He is survived by his wife, Tirzah Ison Bowden; his daughter Jane Bowden Womack (Gary) of Cary, NC; his daughter Page Bowden of Greensboro, NC; his son R. H. “Bo” Bowden, Jr. of Richmond, VA; grandson Mark Womack and granddaughter Katherine Womack. Also surviving are his brother L. S. Bowden, Jr. and sister Nan Naylor of Mocksville, NC, and twelve nieces and nephews. He was predeceased by his sister Martha Morrow. Ralph was born on his parents’ farm in Davie County, NC to Leo Sheek and Pearl Hartman Bowden. The family moved to Mocksville when his father was elected sheriff. After graduating from Mocksville High School, he enrolled in college before enlisting in the Army, serving in the 66th Counter Intelligence Corps in Stuttgart, Germany for two years. After his discharge, he graduated from the University of North Carolina at Chapel Hill, receiving Bachelor of Science and MBA degrees. Originally entering the field of medical sales, Ralph found his niche in banking after he and Tirzah started a family, first as a branch manager with Wachovia Bank in Charlotte in 1960. He then accepted a job with Waccamaw Bank in 1966 in Whiteville, NC, rising to Senior Vice President of Marketing and Advertising, where he wrote the regulatory application for the first multibank holding company in North Carolina, United Carolina Bancshares. He graduated from the Stonier Graduate School of Banking in 1970. In 1974, he became the President and CEO of Gateway Bank in Greensboro, until its merger with Northwestern Bank. In 1981 he was an organizer, President and CEO of Triad Bank, acquired by United Carolina Bank in 1992, which ultimately became part of BB&T. Ralph was an enthusiastic Rotarian, where he was a member of Crescent Rotary Club, serving as its President, eventually becoming a District Governor, and a District Foundation Chairman. He also served in various roles with other organizations, including District Chairman of the Boy Scouts of America, and Chairman of the Better Business Bureau of Central North Carolina. He was an active member of Christ United Methodist Church and the Piedmont Investors Club. Ralph enjoyed playing tennis, walking on the beach at Pawleys Island, SC where he and Tirzah lived immediately after his retirement, playing poker with his friends, and following the Tar Heels. He was also widely considered to grill the best hamburgers in the state, but passed without giving up his culinary secrets. The family will hold a private graveside service at Forest Lawn Cemetery on Monday, October 4. In lieu of flowers, please consider donating to Christ United Methodist Church or the Crescent Rotary Club Foundation.

The family of Ralph H. Bowden created this Life Tributes page to make it easy to share your memories.

Send flowers to the Bowden family.