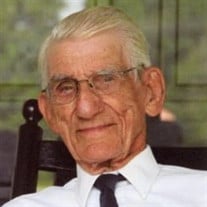 Phil Waldo Rudd passed away Sunday, August 15 at his home, with close family by his side. A graveside service will be held at 2:00 PM on Sunday, August 22 at Lee's Chapel United Methodist Church in Greensboro. Mr. Rudd will lie in repose at Forbis & Dick N. Elm Chapel from 10AM to 5PM Friday August 20th, and from 10AM until 2 PM on Saturday August 21st. Phil was born in Guilford County on November 29,1922 to Seneca Leon Rudd and Clara Osborne Rudd. He was a lifelong resident of Guilford County. Phil was a World War II veteran who served in the 926th Signal Battalion/9th Air Force/Army Air Corp. After his honorable discharge from the Army, he delivered telegrams for Western Union all around Greensboro. He later owned Standard Systems and installed home security alarms for many people in and around Guilford County. Phil coached Brightwood Little League baseball for 40 plus years; hundreds of men fondly remember him as a beloved coach and mentor. Decades later and until his death, Phil still remembered all the names and faces of his former players. He was a lifelong member of Lee’s Chapel United Methodist Church, where he sang in the choir. He loved to sing and in the last few years, loved going to Karonda’s Restaurant on Sunday evenings where he sang gospel songs with the blues band there. Phil was a familiar face around his family’s farm, where he could often be found in the farm stand, greeting friends and customers with a smile and a hug. He loved helping customers find the best strawberries in the picking field, and he was always on the hunt for the biggest greenhouse tomato - usually to give to a friend. Behind the scenes, he frequently worked in the greenhouse, seeded countless plants over the years, and always stepped in to help at busy times. Phil so loved his family, extended family, and friends. He was a social butterfly and always made time to stop for a hug and a chat with anyone he knew. We find peace in knowing that he is with his Heavenly Father, his eternal reward for 98 years well-lived. Phil is survived by his son, Kenneth Rudd (Joan), daughter Kathy Dubree (George), stepdaughters Betty Fernald (Harold) and Patsy Jordan; brother Jack Rudd; grandchildren Ken Rudd (Ashley), Matt Rudd (Chelsey), Nic Perry, Leigh Shelton (Dean), and Amanda Brouse (Paul); step grandchildren Lisa Brunton, Amy Cable (Bill), Cindy Jordan, and Donna Byerly (Greg); 14 great grandchildren, 7 step-great grandchildren, and one step-great great grandchild. Phil was preceded in death by his parents, Seneca and Clara Rudd, his first wife Edna Hendricks Rudd, his second wife Eloise Little Odell Rudd, and his sisters Leone Jones and Edith Rudd. The family would like to thank Comfort Keepers for the wonderful caregivers they provided and to AuthoraCare (Hospice) for seeing to Phil’s and the family’s needs in his last few weeks. Memorial contributions can be made to Lee’s Chapel UMC (2303 Lee’s Chapel Road, Greensboro NC 27405).

Phil Waldo Rudd passed away Sunday, August 15 at his home, with close family by his side. A graveside service will be held at 2:00 PM on Sunday, August 22 at Lee's Chapel United Methodist Church in Greensboro. Mr. Rudd will lie in repose at... View Obituary & Service Information

The family of Phil W. Rudd created this Life Tributes page to make it easy to share your memories.

Phil Waldo Rudd passed away Sunday, August 15 at his home, with...

Send flowers to the Rudd family.