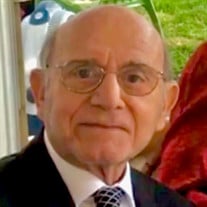 Peter Charles Gratale peacefully passed away November 27, 2021. He was surrounded by his wife, Barbara, and their loving family. Peter was born June 9, 1935 in Hoboken, NJ to the Late Dominick P. and Adelina Gratale. After graduating High School, he served in the Army for two years where he was stationed in South Korea and returned home to major in business at Pace University in NYC. He married Barbara Charla on March 2, 1957 and had just celebrated their 64th wedding anniversary this year. Peter worked for Cone Mills Corporation in NYC and was transferred to their North Carolina office in Greensboro in 1965. Peter received many accolades and continued his education in Traffic Transportation. He achieved the position of a Division Vice President and served Cone Mills for 46 years. He was called upon to teach classes at GTCC in Traffic Law, which he thoroughly enjoyed. Peter, Barbara, and family were parishioners of Our Lady of Grace and members of Green Valley Pool where they were very involved and made lifelong friends. Pete was very dedicated and volunteered his time for many years answering calls for the Drug and Alcohol Crisis Control Line in Guilford County. He was a lover of life and adventure where he traveled to 6 continents exploring 35 countries. Music, art, and gardening were among his favorite hobbies. He was also a voracious reader. Pete was known for his intelligence, sense of humor, and generosity. But most of all, he loved being with his family. Peter was predeceased by his parents, Adelina and Dominick Gratale, his brothers, Ronald J. and Dominick J. Gratale, sister-in-law MaryAnn Gratale, nephews Ronald Gratale and Christopher Geis, and in-laws Michael and Ann Charla. He is survived by his beloved wife, Barbara Gratale; Children: Laura Gratale Griffin (Mike), Peter Gratale (Anna), Carolyn Gratale Lewis (Scott), Jane Gratale, seven Grandchildren and six Great Grandchildren. Peter leaves a huge hole in the hearts of his family and friends. His love will stay with them forever. Following a private memorial service on December 18, 2021, Peter will be interred at Westminster Gardens Cemetery.

Peter Charles Gratale peacefully passed away November 27, 2021. He was surrounded by his wife, Barbara, and their loving family. Peter was born June 9, 1935 in Hoboken, NJ to the Late Dominick P. and Adelina Gratale. After graduating High... View Obituary & Service Information

The family of Peter Charles Gratale created this Life Tributes page to make it easy to share your memories.

Send flowers to the Gratale family.