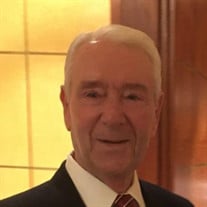 Petar Rosic, age 86, of Greensboro, passed away on Monday, August 23, 2021. He was surrounded by his wife Laura, daughter Gabriela, and son Stefano. A Mass of Christian Burial will be held at 10:00 AM Thursday, August 26, 2021 at St. Benedict’s Catholic Church. The family will receive friends at Forbis & Dick N. Elm Chapel Wednesday August 25th from 6:00-8:00 PM. Interment will be in Bronx NY on Saturday. Petar was born in Silba, Croatia on June 29, 1935. In 1954 he and Laura, escaping communism, immigrated to Italy. They were married in September 1958. In 1964, with the dream of building a better life for his family, they, along with Stefano, immigrated to the United States. He was devoted to his Catholic faith and a parishioner for 20 years at St Benedict’s Catholic Church. There he served as an usher, who enjoyed greeting his fellow parishioners. He is survived by his wife Laura, son Stefano (Leslie), daughter Gabriela Smeraldi (Patrick), grandchildren Stefano P. Rosic, Christopher Rosic, Elvis Pera, and Natalie Rahl, great granddaughter Aria, and brother-in-law Eugene Kuljanic. He was preceded in death by his parents Giovani and Stefania Rosic, 2 brothers and one sister. Memorials may be made to St. Benedicts Catholic Church at 109 W Smith St, Greensboro, NC 27401. Online condolences at www.forbisanddick.com.

The family of Petar Rosic created this Life Tributes page to make it easy to share your memories.

Petar Rosic, age 86, of Greensboro, passed away on Monday, August...

Send flowers to the Rosic family.