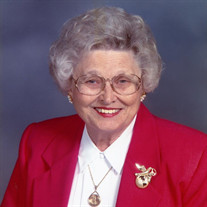 Pattie Ward Miller, 95 of Greensboro, passed away on Thursday, November 11, 2021, at Blumenthal Nursing and Rehab. Center. A funeral service will be held at 11:00 a.m. on Monday, November 15, 2021, at the Forbis and Dick North Elm Street Funeral Chapel. A Private interment will follow later in the day at Lakeview Memorial Park. Pattie was born on December 18, 1925, in Roxboro, NC to the late Aubrey B. Clayton & Katherine Coates Clayton. She was a member of Northside Baptist Church in Greensboro for over 70 years. Pattie was the past president of the Guilford College Civitan’s where she has held membership for over 41 years and received numerous national awards. She also served as a volunteer for Moses Cone Hospital for 28 years. She was well known in many circles for her delicious pies and cakes that she took great pride in making. Pattie will always be remembered as a loving wife, mother, grandmother, aunt, cousin, and friend. She is preceded in death by her husbands, Calvin Coolidge Ward who passed away in 1974 and Malcolm Miller who passed away in 2008, a son, Stephen Clayton Ward and a grandson, Alexander Stefan Ward, and also a brothers and two sisters. She is survived by her son, Michael Ward and his wife Peggy of Greensboro, stepson Ronnie Miller, and stepdaughter Donna Miller both of Greensboro, and a daughter-in-law Mary Ward also of Greensboro, grandchildren, Cary Michael Ward and Tracy Leigh Ward, great granddaughter, Maggie Ward, a nephew, Arnold Oakley and a special cousin Joe Seamster and his wife Hilda. The family will receive friends from 10:00-10:45 a.m. on Monday at the funeral home just prior to the service. In lieu of flowers, memorial contributions can be made to Northside Baptist Church Breakfast Ministry.

Pattie Ward Miller, 95 of Greensboro, passed away on Thursday, November 11, 2021, at Blumenthal Nursing and Rehab. Center. A funeral service will be held at 11:00 a.m. on Monday, November 15, 2021, at the Forbis and Dick North Elm Street Funeral... View Obituary & Service Information

The family of Pattie Ward Miller created this Life Tributes page to make it easy to share your memories.

Pattie Ward Miller, 95 of Greensboro, passed away on Thursday,...

Send flowers to the Miller family.