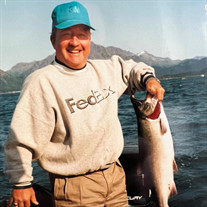 Patrick Allen Foley, 74, departed this life on Friday, February 25, 2022. Patrick was born November 17, 1947, in Bethesda Naval Hospital, in Bethesda, Maryland. He lived all around the world, as his dad was a Navy Pilot, and his mom, a nurse, both who honorably served during WWII. He continued his education at The University of Washington, and loved to watch the Huskies play football. He always had one clear goal, and that was to follow in his dad’s footsteps. Patrick joined the Navy after college, and he too became a Navy fighter pilot. After 20 years of service, he retired from the Navy at the rank of Lt. Commander and continued flying airplanes for USAir and Federal Express until his retirement. His passion for all things related to aviation extended to his hobbies. He was very talented at building things, in particular model airplanes, model ships, and model sail boats. Watching his grandson, Killian, compete in sporting events, always brought the biggest smile to his face. He was proceeded in death by his parents, Walter and Elaine Foley, his brother Dennis Foley, and his daughter Cameran Foley. Left to cherish his memory are his wife of 47 years, Marilyn, his daughter Anne, of Washington, D.C. (Bryer Davis), his daughter Meredith and grandson Killian, both of Greensboro, North Carolina, and his niece Jasper McKay, of Albuquerque, New Mexico. Services and internment will be held at Arlington National Cemetery at a later date. In lieu of flowers and keeping with his love for this country, along with things military, donations may be made on his behalf to The Wounded Warrior Project, or Homes for Our Troops.

Patrick Allen Foley, 74, departed this life on Friday, February 25, 2022. Patrick was born November 17, 1947, in Bethesda Naval Hospital, in Bethesda, Maryland. He lived all around the world, as his dad was a Navy Pilot, and his mom, a... View Obituary & Service Information

The family of Patrick Allen Foley created this Life Tributes page to make it easy to share your memories.

Send flowers to the Foley family.