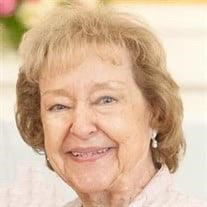 On November 26, 2021, Patricia Fornof Clapp (92) peacefully departed this world for her heavenly reward. Patricia was born on March 10, 1929, the third of seven children born to Inez and Adam Fornof. Raised in Wilkinsburg, PA, a suburb of Pittsburgh, she graduated from Wilkinsburg High School and attended the University of Pittsburgh. She met her future husband, Harry Patterson Clapp, when they were set up on a blind date by his coworker. They married in 1952 and celebrated their 69th anniversary in 2021. As a member of the Junior Section of Wilkinsburg Women’s Club, Patricia led the effort to establish a preschool program for, what was termed at the time, the mentally retarded. Little did she know this would become her life’s work. Shortly after this, Jeffrey was born followed by the birth of David and then later, Jean. David was born with Down Syndrome and Patricia became a fierce advocate for the mentally disabled. She was elected local and then state President of the Pennsylvania Association of Retarded Citizens (PARC) and led a number of initiatives that forever changed the lives of millions. The most impactful of these was writing what become PL 94-142, “The Right to Education Law for the Mentally Disabled” in 1975. The draft for this law was written at her kitchen table and served as the model for a similar that was enacted nationwide. She also served as a Regional Vice President for the national organization (NARC). During her time in office, she helped establish Youth PARC and worked on the national Youth ARC advisory board. Patricia had many accomplishments and received numerous awards and accolades for her tireless work on behalf of the disabled. Some of these are in an exhibit at the Heinz History Center in Pittsburgh. Her volunteer work did not diminish her attention to her family. She served as a Cub Scout Den Mother for both her sons and as a Girl Scout Troop leader for her daughter. She and Harry played active roles in their children’s lives and helped shape them into the individuals they became. An active churchgoer, Patricia sang in the choir at Calvary Lutheran Church in Wilkinsburg and had the lead roles in church productions of Oklahoma and The Music Man. After moving to McLean, Virginia, Patricia continued her singing with the Andrew Chapel UMC choir where she made numerous friendships that continued for years. In addition to her volunteer work, she was the associate director of the Christian Refugee Outreach program where she worked primarily with refugees from Vietnam and Afghanistan. Her dedication to and advocacy for these individuals changed many lives. She met and “adopted” Hamida Miller who became a second daughter to her and Hai and Kim Pham who became like family. Retiring with her husband and son David to Greensboro, North Carolina in 1991 did not deter her from continuing her advocacy. Realizing few opportunities existed for the intellectually and developmentally disabled, she wrote and was awarded a grant to begin what is now known as arcBARKS. The program began in her kitchen and now has a permanent location in Greensboro. The company, made up primarily of individuals with disabilities, bakes, packages and sells dog treats using recipes created and tested in Patricia’s home kitchen. The impact Patricia had on others will continue for years to come. Her legacy lives on in the lives she inspired and in those who continue her fight for those who need advocacy. She will be sorely missed by all who loved and admired her. She is survived by her loving husband, Harry Patterson Clapp, son Jeffrey (Lynn) Clapp of Pittsburgh, daughter Jean (Tim) Groome of High Point, grandchildren Brian (Barbie) Clapp of Austin, Texas and Megan Clapp of Pittsburgh, and great-granddaughter Samantha Clapp of Austin, as well as numerous nieces, nephews, and friends. She is preceded in death by her beloved son David and all of her siblings: Ruby Blackburn, Garnet Reed, Adamae Gilmore, Adam Fornof, John Fornof and George Fornof. The family extends its gratitude to our angels on earth who provided for and cared for Patricia. Felecia Gilmer and LaTosha Irving who became part of the family and Mitchell Causey who already was family. helped make Patricia’s last days comfortable and full of love and affection. Authoracare (Hospice) of Greensboro made it possible for Patricia to be at home during her final days. “Thank you” will never be enough to express the family’s gratitude. Funeral Arrangements are being made through Forbis and Dick Funeral Services. Visitation will be held on Wednesday, December 1 at Mt. Pleasant UMC on Burlington Road at 1:00. The funeral service will be at 2:00 with burial immediately following at the church. In lieu of flowers, the family would suggest donations be made to Authoracare of Greensboro or to a local advocacy organization. https://us02web.zoom.us/j/81482915496?pwd=QUE5Q05DREhmak5vVFNxMUovb21CUT09 Meeting ID: 814 8291 5496 Passcode: 123456

On November 26, 2021, Patricia Fornof Clapp (92) peacefully departed this world for her heavenly reward. Patricia was born on March 10, 1929, the third of seven children born to Inez and Adam Fornof. Raised in Wilkinsburg, PA, a suburb of Pittsburgh,... View Obituary & Service Information

The family of Patricia Clapp created this Life Tributes page to make it easy to share your memories.