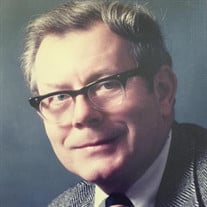 Palmer Friend Shelburne of Colfax, N.C., 91, died peacefully on July 21. Palmer deeply loved his family, being a physician and caring for his patients. He loved getting outdoors to explore the natural world and travelled widely to see flowers, birds and mountains. Palmer was born on January 6th, 1930 to Dr. and Mrs. Palmer A. Shelburne of Greensboro, N.C. He received his Bachelor of Science from Davidson College and his medical degree from the University of North Carolina at Chapel Hill. Following graduation, Palmer was an intern at Duke University. After marrying Julie Webber in 1956, he went on to serve 1 and ½ years in the U.S. Navy at Camp Lejeune. He then became a resident at Mass Memorial in Boston. Returning to his home state and Duke, Palmer held a fellowship in cardiology, launching a 30-year career of practicing medicine. In 1978, Palmer served as the President of the Greensboro Academy of Medicine. He was a lifetime member of the N.C. Heart Association, certified by the American Board of Internal Medicine and an associate of the American Board of Internal Medicine and the American College of Physicians. He was a fellow of the American College of Cardiology and the Council on Clinical Cardiology of the American Heart Association. Never one to slow down, Palmer went on after his retirement to 20 years of volunteering at Habitat for Humanity. Palmer is survived by his wife of 64 years, Julie Shelburne, his daughter Cathy Beck (Bill), son Brian Shelburne (Erika) and son Peter Shelburne (Ellie) and his sister, Mary Helen Watkins of Durham, N.C. He was blessed with five grandchildren and many nieces and nephews. He was predeceased by his sister Ruth Bamford of Colfax, N.C. His life will be celebrated on Sunday, July 25th at 2:00 pm at River Landing at Sandy Ridge, 1575 John Knox Drive, Colfax, NC 27235. Prior to the celebration, the internment will be held at Forest Lawn at 12:00 pm on Sunday, July 25th.The family will receive guests after the service at River Landing. The family wants to express appreciation for the loving care provided by the staff at Winged Foot in River Landing. In lieu of flowers, contributions can be made to The Nature Conservancy or Habitat for Humanity.

Palmer Friend Shelburne of Colfax, N.C., 91, died peacefully on July 21. Palmer deeply loved his family, being a physician and caring for his patients. He loved getting outdoors to explore the natural world and travelled widely to see flowers,... View Obituary & Service Information

The family of Dr Palmer Friend Shelburne created this Life Tributes page to make it easy to share your memories.

Send flowers to the Shelburne family.