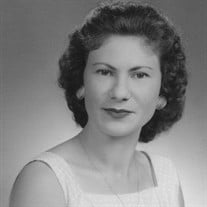 Nafisiká (Nickie) Varsamis Tsintzos of Greensboro, passed into the arms of our Lord on June 24, 2021. Nickie was a strong Christian woman of both mind and body who lived 94 years with a love of God, her family, and a devotion to the Greek Orthodox Church. Nickie was born in Mavromati, a small mountain village located in central Greece on June 14, 1927. Her close-knit family consisting of parents William and Éleni Varsamis and her six other siblings, lived a humble existence farming the land. Later, the family endured the German occupation during World War 2 and thereafter, emigrated to the United States in 1947 while Greece was embroiled in a civil war. Eventually the family settled in Greensboro and four years later she met her future husband, Gregory Tsintzos and they were married in November 1951. They had two sons who she raised within the typical Greek traditions. During their years together, she supported her husband in his business actions as a restauranteur and former owner of the Southeastern Building Soda Shop until his retirement. During her life in Greensboro, she was an active member of the Greek Orthodox Church and served as a former president of the Greek woman’s organization, the Philoptochos Society. She also frequently provided the prosphora (bread) for church services, the koliva (a sweet wheat tradition) for memorial services and assisted with baking and other tasks associated with church social functions as well as the annual Greek Food Festival. In addition, Nickie was an avid reader, gardener, and loved watching her daily soaps on TV. Nickie is survived by her sons George Tsintzos, Bill Tsintzos (Dee) and her beloved granddaughters, Savannah Tsintzos and Noelle Tsintzos, her sister and brother-in-law, Dorothy and Lampros Megremis, her brother and sister-in-law, Kimmon and Gwen Varsamis, her sister-in-law, Kay Varsamis, her niece and caregiver, Susan Frick, and many more nieces, nephews and their spouses and children. The Trisagion Service will be held Monday, June 28, 2021 at The Dormition of the Theotokos Greek Orthodox Church located at 800 Westridge Road in Greensboro at 10:30 a.m. followed by the funeral service at 11 a.m. The graveside service will follow at Forest Lawn Cemetery.

Nafisiká (Nickie) Varsamis Tsintzos of Greensboro, passed into the arms of our Lord on June 24, 2021. Nickie was a strong Christian woman of both mind and body who lived 94 years with a love of God, her family, and a devotion to the Greek Orthodox... View Obituary & Service Information

The family of Nickie Tsintzos created this Life Tributes page to make it easy to share your memories.

Send flowers to the Tsintzos family.