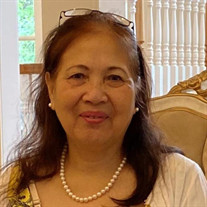 We sadly announce the passing of our wife, mother, and grandmother, whom we loved so much, admired, and miss dearly, Nai Krim Touprong. She was born on February 8th, 1954, in K&#8217;Plung, Dran, Haut-Donnai, South Vietnam and went home with... View Obituary & Service Information

The family of Nai Krim Touprong created this Life Tributes page to make it easy to share your memories.

We sadly announce the passing of our wife, mother, and grandmother,...

Send flowers to the Touprong family.