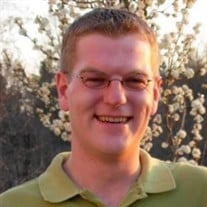 Michael Todd Ackerson, 41 years, died on April 30, 2021 at his home while surrounded by his loved ones. A visitation will be held on Tuesday, May 11, 2021 from 6:00 pm to 8:00 pm at Forbis and Dick Guilford Chapel, 5926 West Friendly Avenue, Greensboro, NC 27410. A Celebration of Life will be held at 11:00 am at St. Paul the Apostle Catholic Church, 2715 Horse Pen Creek Road, Greensboro, NC 27410. Masks are required and social distancing will be observed. Michael was born in Elmira, NY and, at age of 6 years old, he and his family ,moved to Melbourne, FL. In 1990, at age 11 they moved to NC where he met many of his best friends, especially Bonnie Petersen (Green) who was always by his side to support him. Michael was an active participant of the St. Paul the Apostle Catholic youth group where he was part of the beloved “amoeba”, much to the dismay of his youth minister, MJ. He was the social director of the activities the group would do that weekend, whether hanging at his home, going to the movies or other activities. He graduated from Western Guilford High School in 1997 and attended Western Carolina and UNCG. He started his job at John Neal Books (an online Calligraphy store) in 2001 where he was office manager and loved his job. He remained there until his death. Michael would attend conferences where he would set up in the vendor area and the customers who ordered from John Neal online would gather to see his smiling face and wonderful personality they had gotten to know over the phone. Michael’s family was everything to him especially his nieces and nephews whom he adored. He loved to hang out at his parents in the pool or the hot tub. His smile was infectious, and his loving personality made everyone around him feel wanted and accepted. Michael is predeceased by John T. Ackerson, Paternal grandfather, LeRoy W. Freeman, Maternal Grandfather, Marilyn L. Murray Freeman, Maternal Grandmother and his furry babies Juan Carlos, Brandy and Pluffy. Michael’s survivors include his loving parents, Donald J. and Miralee Ackerson; Brothers, James C. and Jeremy J. Ackerson (Sarah); Sister- Stacy L. Hiers (Kristian); Paternal Grandmother- Eleanor Ackerson; Nephews, Logan Hiers (Ellie), Trey Hiers, Wyatt Ackerson; nieces, Reagan Hiers, Emma Ackerson Butera (Mike), Madison Ackerson, Mackenzie Ackerson and Whitney Ackerson and his favorite side kick- JoPa (JoJo)- his yorkie. The family requests that memorial donations in Michael’s name be made at St. Jude’s Children’s Research Hospital, 501 St. Jude Place, Memphis, TN 38105 and for his love of animals- ARFP (Animal Rescue & Foster Program) 711 Milner Dr. Greensboro, NC 27410 Many thanks to Dr. Sherrill and the Cancer Center and to John Neal and his staff for the love and support throughout his working career which made his life so fulfilled. Also, many thanks to all who had kind thoughts and were praying for Michael for the tremendous fight he put up. For those who will attend the Celebration of Life, it is requested to wear blue in support of Colorectal Cancer. The funeral will be livestreamed on YouTube at www.stpaulcc.org Forbis and Dick Guilford Chapel is serving the family and online condolences may be offered at www.forbisanddick.com

The family of Michael Todd Ackerson created this Life Tributes page to make it easy to share your memories.

Send flowers to the Ackerson family.