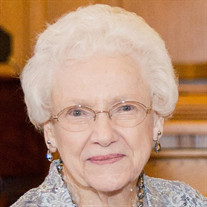 Mavin Steele passed away on August 6, 2021 at the age of 92. She was the youngest of five children born to Roy and Dollie Martin of Floyd, Virginia. Growing up, she helped on the farm and helped her father in the country store he owned. She graduated from Floyd High School as Valedictorian in 1945. Upon graduation she enrolled in the Secretarial course at National Business College in Roanoke Virginia. Mavin always wanted to be a secretary or bookkeeper as she had a love for office work. After graduating from National with honors, Mavin was asked to stay and teach shorthand and typing which she did for three years. It was during this time that she met the love of her life, Jack Steele. After her time teaching at National, she accepted a position as secretary with an automobile dealership in Roanoke. Jack and Mavin were married on March, 7, 1953 in Roanoke and she moved to Greensboro with her husband where she was employed at Wysong and Miles Company. Mavin retired after over 26 years of service. Mavin was a member of Presbyterian Church of the Covenant since 1963. She volunteered many hours at the church after she retired. In 1993 she was honored with a Life Membership in Presbyterian Women. She also volunteered at the Shepherd’s Center in Greensboro during the early days of the Shepherd’s Center. Mavin enjoyed traveling, often traveling with friends on a chartered bus. By the time she was 21 she had been in 21 states, four provinces of Canada, and Cuba. One of her most enjoyable trips was to Hawaii with her husband celebrating their silver wedding anniversary, with many friends from their church including her former pastor and his wife as tour directors. Mavin loved to entertain large groups from the church in their home for special occasions, in particular Christmas parties for the Homebuilders and their Sunday School class. She enjoyed square dancing, playing bridge, planting flowers, sewing, and cooking for friends and family. Mavin loved her family dearly and was always there for them when needed. She especially enjoyed visits with her grandchildren during their breaks from school. She and Jack had a wonderful life together. Mavin is predeceased by her parents and by siblings, Elvin Martin, Treatise Webb, Benson Martin, and Chlonetia Thompson, sisters-in-law Frances Martin and Coreen Martin, and brothers-in-law, Elmer Webb and Arlie Thompson. She is survived by her husband of 68 years Jack Steele, son Marty Steele (Julie), grandchildren Adam Steele (Shannon) and Carolyn Rasp (Matt), three greatgrandchildren, and many nieces and nephews. A private graveside will be held with Ken Massey with officiating. In lieu of flowers, memorials may be made to Presbyterian Homes Foundation Inc., 2109 Sandy Ridge Rd., Colfax, NC 27235, marked for River Landing Residents Assistance Fund or to a charity of your choice.

Mavin Steele passed away on August 6, 2021 at the age of 92. She was the youngest of five children born to Roy and Dollie Martin of Floyd, Virginia. Growing up, she helped on the farm and helped her father in the country store he owned. She... View Obituary & Service Information

The family of Mavin Martin Steele created this Life Tributes page to make it easy to share your memories.

Send flowers to the Steele family.